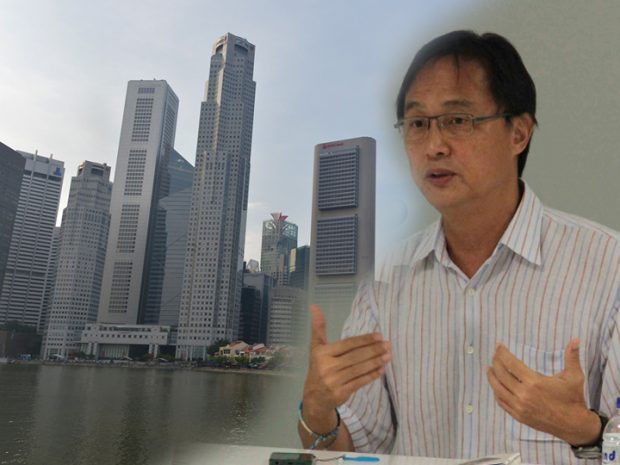 Former GIC chief economist Yeoh Lam Keong has postulated on Facebook that the impending tax hike here may be implemented “to maintain one of the most extravagant public savings rates in the world” while the government continues to under-spend on social and infrastructural investments.

Yeoh’s post is in response to Prime Minister Lee Hsien Loong’s confirmation last weekend that higher taxes are inevitable when he stressed that it is a matter of when and not whether taxes will be hiked.

In announcing the impending tax hike, PM Lee indicated that the hike is part of the government’s effort to plan for the future:

“They are a vote of confidence in Singapore’s future

Calling the practice of “spending considerably less, yet still raise taxes in the name of fiscal prudence to maintain one of the most extravagant public savings rates in the world” a “kia su” one, Yeoh pointed out that the large fiscal savings Singapore has accumulated is an “excessively unhealthy level of national savings” according to the International Monetary Fund.

The Bigger Fork in Our Long-Term Fiscal Policy RoadTo be fair to PM Lee, both the MOF and he have clarified that…

In case you cannot read his text above:

“The Bigger Fork in Our Long-Term Fiscal Policy Road

To be fair to PM Lee, both the MOF and he have clarified that consistent with DPM Tharmans 2015 remarks, we do not have to raise taxes before the end of the decade.

So there’s really no need to get our fiscal knickers into a twist about GST or income tax increases till after the next GE folks..

What PM was talking about and trying to tell the public was that in the longer term after 2020, tax increases might be needed given inevitable rises in social spending and infrastructure needs in the more distant future.

Actually I really hope that in the end he’s right but from an entirely different angle.

My reason : our current fiscal headroom is so large that were we to truly need higher tax revenues, this would mean that much needed increases in social spending would finally finally have been funded first. Given our current paltry current social policy spending levels, ( much lower than OECD averages as a share of GDP for healthcare, education and social protection) this would be an excellent policy development!

Consider first that we have a 5-7% GDP structural budget surplus ( calculated by global fiscal policemen the IMF no less) – that’s $20-30 bn extra a year. (I don’t want to get into technicalities of how that is a valid number here – please read my previous posts ).

Second, the formula for using net investment returns contribution or NIRC only uses only half of expected long term real returns leaving official reserves to grow by about 2% in real or about 4% in nominal terms for future generations. This could potentially contribute at least another $14bn to the budget or 3.5% of GDP currently.

This 50% spending rule for NIRC itself is a questionable division of investment income from official reserves and a shows a strangely skewed social time preference. Shouldn’t a more reasonable time preference be to use more of the investment income ( not even the real principal mind you ) for the pressing problems of the present generation in this current decade?

Surely the needs of current citizens who have built modern Singapore through very tough times and have serious remaining problems with absolute poverty, inadequate retirement finances, no universal long term or primary chronic health care, underspending in primary and secondary education relative to OECD norms, inadequately planned and funded industrial policy and a badly underperforming public transport system needs this spending now and over this coming decade. Much more so than the uncertain problems of significantly richer coming generations in the much longer term future.

I suspect though, that in the end, we might just be left Singapore daydreaming.

Rather than first spend this hard earned, exceptional fiscal largesse on pressing social and infrastructure needs of the day, then raise taxes only if necessary afterwards, I suspect that our policy makers would instead tend rather towards raising taxes first, partly to keep this implicit huge fiscal savings largely intact ( by the way the IMF thinks that this is an excessively unhealthy level of national savings ) for the rainy day in the even more distant future!

So here is what I think is the really important fork in our long term fiscal and social policy road:

Either we will finally spend enough on social and infrastructural spending – another 8-10% of GDP over the next decade – or we will continue in the kia su practice of spending considerably less, yet still raise taxes in the name of fiscal prudence to maintain one of the most extravagant public savings rates in the world.

All this while continuing to expand social policy at decidedly suboptimal levels that does not really meet our social policy needs sufficiently in all the above key areas.

To do the former means stepping out of current incrementalist, anti – welfare and state intervention mindsets and boldly reshaping, refitting and reinvesting in social policy in healthcare, education, social security, public housing and transport and industrial policy to make these key areas truly future ready for our citizens. This is what we did so successfully and innovatively in our first 30 years of independence.

Please keep in mind that at this much higher level of spending we will merely be at the lower bound of OECD public spending as a share of GDP and roughly on par with developed East Asian economies. We would also be close to true budget balance ie not structurally in fiscal deficit or running up debt. Yes, that’s how extremely conservative our current long term fiscal position is.

The latter, however ( largely status quo), means kicking the can down the road through incremental rather than transformative changes that are likely to end up being constantly behind the relentless curve of economic instability arising from globalization, technological change and worsening demographics. And perversely maintaining the highest and fastest growing fiscal resources in the world.

No prizes for which I think is the more likely scenario on current trends. Which fork we finally take and when, however, depends on both the boldness of political leadership and citizen political awareness to push for a new social and fiscal policy regime that will truly cater to our well being in a more reasonable and balanced but still sustainable way.”

https://theindependent.sg.sg/profligate-spending-and-irresponsible-unsustainable-plans-require-you-to-raise-taxes-pm-lee-in-ge2015/Follow us on Social Media