In a survey conducted among 1,075 Singaporeans, findings showed that 47 percent were less likely to hire someone with a visible tattoo

SINGAPORE- While societies have evolved to be more open-minded and receptive towards tattoos, it is still a taboo in more conservative countries where tattoos are perceived negatively. According to a survey, in Singapore, having a tattoo can affect one’s employment status.

A Mothership report states that findings by market research agency YouGov showed that tattoos are still a quibbling point for most Singaporeans when it comes to hiring someone.

After surveying 1,075 Singaporeans, the research showed that 47 percent will be less likely to hire someone with a visible tattoo.

48 percent of the people surveyed shared that having tattoos will not affect their hiring decisions. Five percent stated they would be “a lot more likely” or “somewhat more likely” to hire someone with a visible tattoo.

Two in five, mostly those above 55, have a negative impression of those with tattoos.

Although around 50 percent of the people surveyed feel tattoos should not affect one’s employment prospects, visible tattoos do affect the chances of getting a job.

58 percent of the people surveyed think tattoos should be covered at work.

70 percent also find certain professions might not be fit for those with tattoos.

87 percent of them will not hire someone with face tattoos, the next least employable tattoo placements are the neck (73 percent), hand (61 percent) and arm (59 percent).

Clearly, the results show that many Singaporeans may have a conservative mindset.

However, according to views on Facebook, many seemed to think that tattoos should not affect one’s employment status, especially in this day and age. In fact, many people say that some people with tattoos may have better personalities than those without, showing that tattoos are not a reflection of one’s character.

Others called it an art form, which is not surprising, since it is common among many young people today. Among the youth, tattoos are being accepted as they’re no longer associated solely with gangs, but regarded as a form of self-expression.

While cultural norms have shifted, the social stigma of tattoos remain deep-rooted in the Asian culture, where employers may associate with tattoos negatively. However, it should be noted that such bias has no basis, and is purely a traditional viewpoint.

One netizen named such a discriminatory mindset as hypocrisy and pointed out that some employers have tattoos as well. 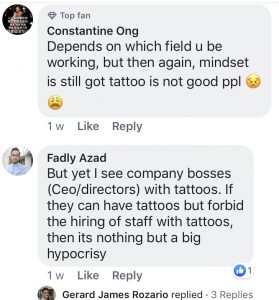 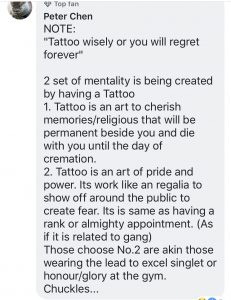 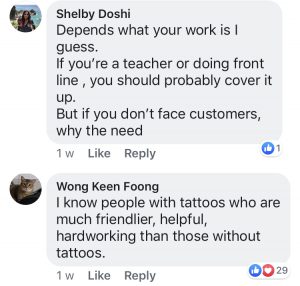 When interviewed, a tattooed youth who did not wish to be named felt that not many companies are open to tattooed employees due to “conservativity in the workplace”. However, he said it does not “eliminate employment”.

Selena Zhang, a nineteen-year-old non-tattooed youth who currently holds a part time job, expressed that tattoos do create an “uneasy first impression”. However, they should not affect the employment status of a person as the tattoos are not representative of one’s character.

Another issue raised is the location of the tattoos. If the tattoos are apparent, this certainly affects the impression that it carries.

Needless to say, the type of job that one does is also closely associated with the conservative view concluded above.

Perhaps, in this day and age, certain social stigmas should be eradicated as society progresses. For Singapore, it appears that it will take quite a while before society moves on from such stigmas.