Singapore— Tan Chuan Jin, the country’s Speaker of the Parliament, gleefully took to Facebook on Sunday (Mar 15) about a “new word” i.e. “Singaporise,” posting two photos of screenshots of articles from the Financial Times (FT) and Business Insider, both of which use the word in a positive manner.

The FT article is from Friday (March 13), and is entitled “The coronavirus: my part in its downfall,” written by Edward Luce. The writer, an American, says that his government would do well to copy what Singapore has done.

Concerning the quarantine imposed on US citizens, he writes, “For how long will this tedious horror go on? That depends on the quality of public action and private behavior. If the US could Singaporize on both counts, we could be through the worst within a month. If we continue the record of the last few weeks — too late, too bureaucratic, and a White House in shambolic denial — it could get sharply worse over two or three months. The big lesson is that countries that act decisively and quickly are far better off than those who block their ears and hope it will go away.”

Praise for how well Singapore (as well as Taiwan, Macau and even South Korea) have handled the onset of the coronavirus outbreak has abounded.

Mr Tan’s other screenshot is from another article entitled “Georgia is Successfully ‘De-Sovietizing’ and ‘Singaporising’,” wherein the author, Simon Black, wrote about how Georgia was a bright spot in a time of economic gloom as it did away with antiquated business institutions in an effort to de-Sovietize and Singaporize. He wrote, “Living here is dirt cheap… and a lot of fun. The people are incredibly warm, and I’ve found that the younger generations which are on board with the ‘Singaporization of Georgia’ are incredibly sharp.”

Netizen Wei Ting also posted the same screenshot from FT, tweeting on Sunday morning “To “Singapore” is now a verb: e.g. If the US could Singaporize Via @FT“.”

To “Singapore” is now a verb:

e.g. If the US could Singaporize ?

The Speaker’s post seemed to spark joy in Singaporeans, who have shared it over 1,600 times and reacted to and commented on his post. 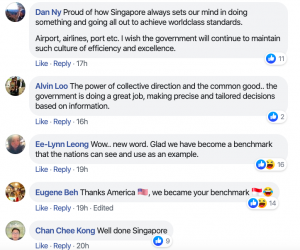 One individual who commented said that he had been asked by a school in the US to “Singaporeanize” their math lessons.

One proudly wrote that the definition of “Singaporeanize” is “to solve the problem.”

Another netizen gave this definition: “Singaporise: according to Oxford Dictionary, it means do things efficiently and effectively, with citizens at heart.”

Some said it should become the word of the year.