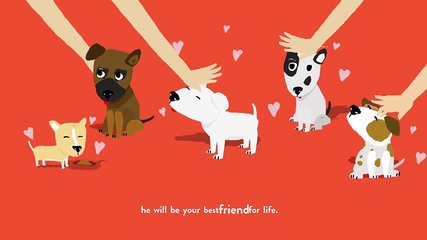 “How Much Is That Doggie In the Window?” It is a famous song that many children have grown up singing in the last 50 years. In the next 50 years, however, many children might grow up with a song about another ‘doggie’: the doggie in the shelter.
In conjunction with its landmark move to its new premises in Sungei Tengah, The Society For Prevention of Cruelty to Animals (SPCA) is working with creative agency DDB Group Singapore on a global campaign aimed at getting children to sing “Do You See That Doggie In the Shelter?” – a little-known remake of the late Patti Page’s children’s classic, “How Much Is That Doggie in the Window?” by Patti Page herself.
“When I recorded that song, more than 50 years ago; “Doggie in the Window” seemed like a sweet and harmless message. Now the puppies in pet stores may still be adorable, but most of them come from puppy mills. So I’ve changed my tune. I want this song with new lyrics, Doggie in the Shelter, to become an anthem for homeless pets and animal shelters”, said Patti Page, before she passed away in 2013.
The campaign started in October 2015 and its aim is to encourage children to embrace adoption from animal shelters, by getting them to sing about it. To do that, DDB Group Singapore has recorded a new, more youthful version of the song. And based on this version, they have produced an animated sing-along video and a picture book.
Selina Sebastian, SPCA’s Head of Education explains, “We feel that if our children grew up singing “Do You See That Doggie in the Shelter?” then adopting a shelter dog would gradually become the natural thing for them to do, and for society as a whole”.
“The long term vision is really to shape a culture where adoption is the norm when it comes to getting a pet, not buying from a pet store; but even in the short run, when people hear their sons, daughters, nieces, nephews and cousins singing this song again and again, they too will get the message”, adds Rowena Bhagchandani, Managing Director at DDB Group Singapore.
In just 4 months, the “Doggie in the Shelter” campaign has reached children all over the world. The sing-along video has been played (for free) on Animal Planet and Discovery Kids channel, reaching audiences in 10 countries including The Philippines, Indonesia, Thailand, Hong Kong and Papua New Guinea.
The picture book has been distributed to over 40 preschools and primary schools, where they will continually be used to teach kids about adoption and shelter animals. This includes schools in Singapore like Eton House, White Lodge and St. Gabriel’s Primary School; as well as many overseas schools like German Mills Primary School in Toronto, Aiki Beach Academy in Seattle and Winston Heights Public School in Sydney.

The book has also been made available at all National Library Board (NLB) libraries in Singapore except Library@Esplanade, Library@Chinatown, Library@Orchard and Sengkang Public Library.
“Do You See That Doggie in the Shelter?” has received great support from animal welfare organisations worldwide. In January 2016, PETA (People for the Ethical Treatment of Animals) shared the sing-along video on their Facebook page, helping it to garner over 170,000 views.

In the case of SPCA Hong Kong, they have even decided to build their 2016 “Adopt-a-thon” campaign around it. Using our book, video and campaign artwork, they too have been teaching children the song as they share the importance of choosing to adopt.
Celebrities have also stepped forward to show their support for the campaign on social media. Most notably, international comedian Steve-O shared the sing-along video on his Twitter page, calling it his “new favourite tune”.

This is the sing-along video:
[fvplayer src=”http://youtube.com/watch?v=qa4quLuIfl4″]Have you seen that doggie in the shelter? If not, why not head down to SPCA Singapore?