The Independent Singapore News
Home News Featured News Social distancing in malls, supermarkets but why not on trains and buses?

Social distancing in malls, supermarkets but why not on trains and buses? Singapore — People have been sharing photos online of crowded buses and trains, especially during the morning and evening peak hours, and wondering why there is no social distancing on them.

They are now wondering even more because the Government has introduced more stringent safe distancing measures which include new penalties for offenders.

However, despite these measures, many have pointed out that the social distancing measures are not observed on buses or trains, with people still sitting next to each other. The photo above was taken by a TISG correspondent during a train ride from Bishan Station to Braddell Station at about 2.30 pm on Thursday (March 26). Although it was not the morning or evening peak, all seats were taken up and no social distancing was  observed. The situation is much worse during the morning and evening peak hours. 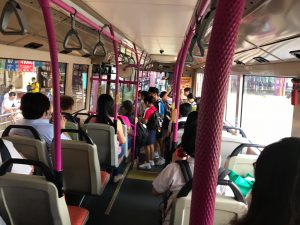 Similarly, on a bus (above) from Bishan Bus Interchange at about 3.30 pm on Thursday (March 26), most of the seats were taken up and there were people standing at the front. The situation gets worse during the morning and evening peak hours. All the seats are usually taken up and the aisle is full of passengers. There is no social distancing.

Earlier this week, two Nominated Members of Parliament (NMPs) called for measures to keep commuters at a safe distance from one another on public transport during the Covid-19 pandemic.

NMP Mohamed Irshad was reported by todayonline.com to have told the House on Wednesday (March 25) that, in the MRT stations and at bus stops, people were still queuing close to one another during peak and off-peak hours.

Similarly, NMP Anthea Ong said she was a public transport commuter and had not seen any change when it comes to safe-distancing measures on the network.

In response, National Development Minister Lawrence Wong said he agreed that safe-distancing measures should be rolled out on public transport but added that the priority for now was to reduce the number of commuters altogether. /TISGFollow us on Social Media