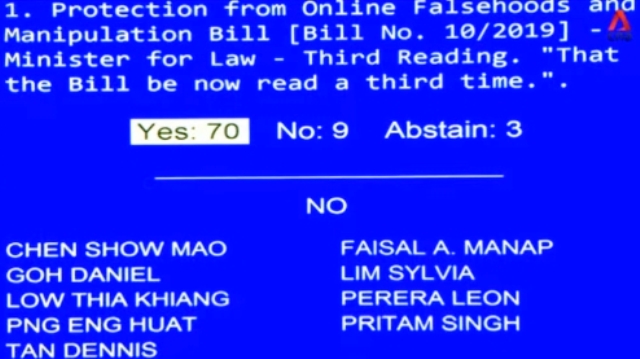 The President of Singapore, Madam Halimah Yacob has assented to the Protection from Online Falsehoods and Manipulation Act (POFMA) on June 3 and it has been published in the Government Gazette.

POFMA has been dubbed as Singapore’s very own fake news law.

POFMA was passed in parliament on May 8, after a fierce debate that took place over two days. The new law, which provides the government with powers to act against online falsehoods to protect public interest, gives ministers the authority to determine what is an online falsehood and whether to take action.

Pritam Singh, the secretary-general of the WP, requested that the MPs’ votes be formally recorded.

The new law gives ministers of the government the authority to command Facebook, Twitter and other such social media sites to put warnings on posts that they have decided are false, or even take these posts down, should they find it necessary.

Protection from Online Falsehoods and Manipulation Bill: WP Votes NO

Last week, the Protection from Online Falsehoods and Manipulation (POFMA) Bill was passed with 72 Ayes and 9 Noes. All 9 WP MPs spoke against the Bill. In case you missed what they said, their complete speeches and exchanges are available on this Facebook page.If TLDR; just watch below.Parliamentary footage from: CNA

Should certain acts be deemed as injurious to the country’s interests as well as malicious, those found guilty could be jailed for as long as 10 years, and companies fined as much as S$1 million.

The Government has emphasized that POFMA’s aim is to protect the country from entities that would purposefully spread falsehoods and harm the public interest and that posts containing satire, parody, and opinions do not fall under the new law’s purview.

Market research agency YouGov’s research released in May of this year showed that more than half of Singaporeans are in favour of the country’s new law designed to combat online falsehoods as well as hate speech. -/TISGFollow us on Social Media