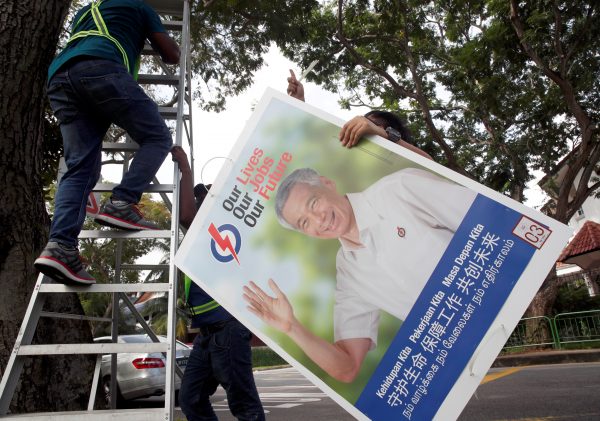 Home NewsSG EconomySG Politics
- Advertisement -
By: East Asia Forum editorial board
Elections in Singapore serve many functions, but allowing for the rotation of power between parties isn’t one of them. The opposition is divided, and hamstrung by an electoral system designed to engineer parliamentary supermajorities for the PAP, a hostile mainstream media, and myriad other restrictions on its ability to organise. Yet five-yearly polls are a way for the PAP to gather feedback on its level of public support and offer a platform for the expression of opposition without the renewal of its governing mandate ever being in doubt.So while no bookie would bother offering odds on the outcome of an election, their results are the subject of intense interest as barometers of public opinion. Election results do much to set the political atmosphere in which the government operates. That’s why the opposition’s showing last week was so significant, writes Michael Barr in our lead article this week. If Friday’s result ‘is not recognised as a disaster,’ Barr writes, ‘the government is in denial’.Much more than the leadership of Prime Minister Lee Hsien Loong was on the voters’ minds. Friday’s polls were meant to be the last before Lee hands over the prime ministership to his deputy, Heng Swee Keat. Despite PAP leaders’ reassurances that the election was not a referendum on Heng, Barr argues that the results suggest the ‘next generation’ of PAP leaders — of which Heng is a key member — has ‘failed to cut through to the electorate, and do not seem up to the job of government’.

Shortcomings in public transportation and service delivery, and some unpopular welfare policies, have taken their toll on the government’s popularity. After initial successes in containing the COVID-19 virus, Singapore experienced a highly disruptive wave of infections centred on foreign workers’ dormitories, and the city-state was forced into lockdown. In the eyes of an electorate conditioned to expect hyper-competent administration, Barr writes, policy slip-ups like these reflect no less than a ‘secular deterioration in the standards of Singapore’s government’.

Certainly, the policy challenges the government faces would test the abilities of the most capable administrators anywhere. Singapore is dead in the centre of mounting geopolitical competition between the United States and China. With a services-based economy highly exposed to the vagaries of global trade, it faces unprecedented challenges in safeguarding its economic future in a deglobalising world while addressing public concerns about inequality and service provision at home.

But voters in any country can be a demanding lot. The fact is that nearly four in 10 Singaporeans have demanded alternatives to the PAP. They are entitled to expect a corresponding level of parliamentary representation, and they are being denied it.

The manifest unfairness of the current system could pose hazards for Singapore’s political stability over the longer term. Given the importance the PAP places in elections for validating the political status quo, it ought to think hard about what happens if and when the ballot box no longer holds that legitimising function. What happens if, in a future election, it achieves another blowout win in the seat count, but on 51 per cent of the popular vote? What about 49 per cent?

Singaporeans have a lot of faith yet to lose in the PAP for that thought experiment to become real. Yet, as Barr writes, it should not be dismissed out of hand. The seat count in 2020 disguises a number of close calls in key electorates. Whether the opposition can organise more strategically to chip away at the PAP vote depends on the shrewdness of its leaders as much as anything else.

It would be a mistake for the PAP to respond to this result by trying to further stack the political deck in its favour. The party can rightfully boast that it has delivered Singapore stability, prosperity, and world-class standards of government. Change the government, the party line goes, and all that will be put at risk. But if the PAP truly has confidence in the institutional durability and social cohesion it has built, then making room for a more authentically democratic politics should pose little harm to Singapore’s future success.

The EAF Editorial Board is located in the Crawford School of Public Policy, College of Asia and the Pacific, The Australian National University. This article was first published by the East Asia Forum. Read the article in full here.