The Singapore Police Force (SPF) would never run out of appeal and comical styles, as they became viral again in their campaign against scams in a cinematic style with the #BirdBoxChallenge.

Netizens tasted once more the other side of SPF aside from their dance moves and upbeat music videos.

Netflix’s BirdBox was a box-office worldwide and the #BirdBoxChallenge has become a craze nowadays.

SPF did not miss the opportunity to ride on that as they took that challenge too.

The Facebook page of Rochor Neighbourhood Police Centre posted a man in blindfold standing in front of the ATM, with a caption: “Don’t transfer blindly.”

The ATM screen flashed the words: “BEWARE OF MONEY TRANSFER SCAM…Be careful, you may be a victim of a scam.” 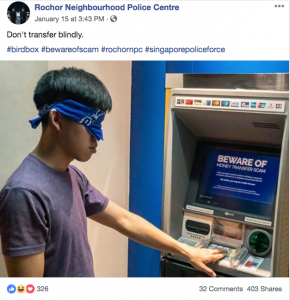 Netizens commended the police force for a witty ad. Others posted their funny remarks too.

Scams have been affecting a lot of people already that SPF wanted the public to be vigilant about it.

In fact, in the Facebook page of Singapore Police Force, a crime advisory on e-commerce scams was posted recently. 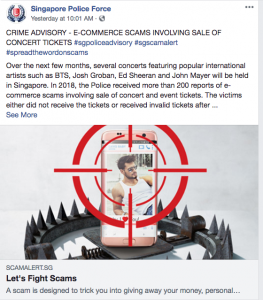 They also encouraged the public to report any scam information to the police authorities:

With this, SPF and www.scamalert.sg wanted the public to take part in their advocacy to fight against scams. 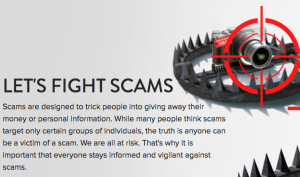