In order to reduce income inequality, the SDP is proposing the legislation of a national minimum wage and retrenchment insurance The Secretary-General of the Singapore Democratic Party Dr Chee Soon Juan shared a video showing the vast number of homeless people in Singapore and called out Prime Minister Lee Hsien Loong for once stating that no one Singaporean should be left behind.

In the video, Dr Chee first apologized for using a photo of a homeless person from Hong Kong. He then showed as a sample size, all of the homeless people in Singapore who resorted to sleeping in McDonald’s outlets. Dr Chee also made reference to a speech PM Lee made last year, where he said that as Singapore progresses, it needs to also ensure the country’s poor are not disadvantaged or left behind. 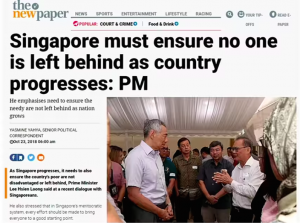 While the Prime Minister said that inequality is present in every society, there is no society where the top and the bottom are the same.

But PM Lee also added that safeguarding social mobility is even more important than reducing inequality.

“Because people can accept that some are rich, some are poor, provided if I am poor I have a chance to work hard and get better off”, he said.

In his video, Dr Chee emphasized that Prime Minister Lee is the highest paid in the world, earning about S$2.2 million annually. In order to reduce income inequality, the SDP proposes the following: “As Singapore’s GDP growth rate rises, so has income inequality and poverty in the country. To ensure that workers are not exploited, we propose the legislation of a national minimum wage. Retrenchment insurance will also be introduced to provide retrenched workers with support while they look for re-employment”.

They also add that their approach to tackling poverty in Singapore would not be a ‘one size fits all’ method.

According to Jeremy Chen of the SDP’s housing policy panel, “A holistic solution for assisting needy households would have to address the needs of individuals at various stages of life. Let us consider children, for example. Assistance rendered must not just address financial and nutritional needs, but also other aspects such as holistic educational needs. In addition, involving children from poor households in low-expense and team sports as well as community projects would help them build life skills”.

“Once a household is identified as potentially being in need of assistance, all available specific information on the household should be used to identify the best means of assistance. This might include food vouchers, free tuition, and sponsored sports activities and community projects”, Chen adds.

Apologies, here are our own McDonald's homeless (and beyond)

Apologies, here are our own McDonald's homeless (and beyond)#SDPNOW #TheWayForward