SDP heavyweight calls out K Shanmugam for hypocrisy and discrimination

“Can the Minister then be consistent and call out the discriminatory practices of his own G in the last 54 years denying Malays full meritocratic access in NS like other races," said Damanhuri bin Abas

His statement came after Minister Shanmugam released a statement in response to Preetipls’ video about the Epay brownface ad.

Mr Shanmugam called out Preeti Nair and her brother Subhas Nair for putting out racially insensitive content, and said, ““When you use 4-letter words, vulgar language, attack another race, put it out in public, we have to draw the line and say not acceptable”.

“When you use 4-letter words, vulgar language, attack another race, put it out in public, we have to draw the line and say not acceptable,” says Minister K. Shanmugam. http://str.sg/ovJY

In response to this, Mr Damanhuri wrote about how he felt that Malays are discriminated against by not being allowed to hold vocations that those of other races are assigned.

He wrote, “Can the Minister then be consistent and call out the discriminatory practices of his own G for the last 54 years denying Malays full meritocratic access in NS like other races. And please, tokenism don’t count. In fact it is insulting and more damaging as it allows excuses for such practices to continue quietly. Or should I make a police report against the G as he recommends” “If he is not willing to do so because of some puzzling security (malay not loyal logic) or national interest reasons (malay archipelago fear logic), can he then at least do the right thing and ask the G to please admit and apologise to all Malays for this unjust and unfair practises by his G that lasted so long and tell us exactly when this will end”.

Mr Damanhuri also said, “We waited patiently for 54 years for some clarity on this sensitive matter. Never making any videos as per his advise. And fortunately Malays are most patient citizen, in fact very loyal and this one is not penat (tired)”.

The letter G in the quotes above are in reference to the government.

Netizens who commented on Mr Damanhuri’s post agreed with him, adding that it was indeed discriminatory. 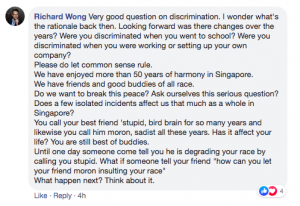 The SDP has also come up with a 10-point plan to improve the conditions of the Malay community in Singapore, adding that “Singapore’s socio-politico-economic system places unnecessary obstacles in the way of the Malay community and thwarts its progress in society. As a result, Singapore is not only not developing its full potential but also losing an integral part of our national identity.

On the economic front, for example, the Malay community lags behind our other ethnic communities and the wide income disparities seen nationwide affects Malays more than our other ethnic groups. The education system also puts Malays at a disadvantage”.