The 62-year-old joins the likes of North Korea’s Kim Jong-Un, China’s Xi Jinping, Russia’s Vladimir Putin and The Taliban, among others, in being branded a “Predator of Press Freedom” by RSF.

In an infographic that accompanied the public branding, RSF highlighted that Lee is the son of Singapore’s founding PM, the late Lee Kuan Yew. It also asserted that Lee’s “attack technique” is “recurrent gagging” and outlined his “kill tally,” “enforcers,” and “favourite targets”. 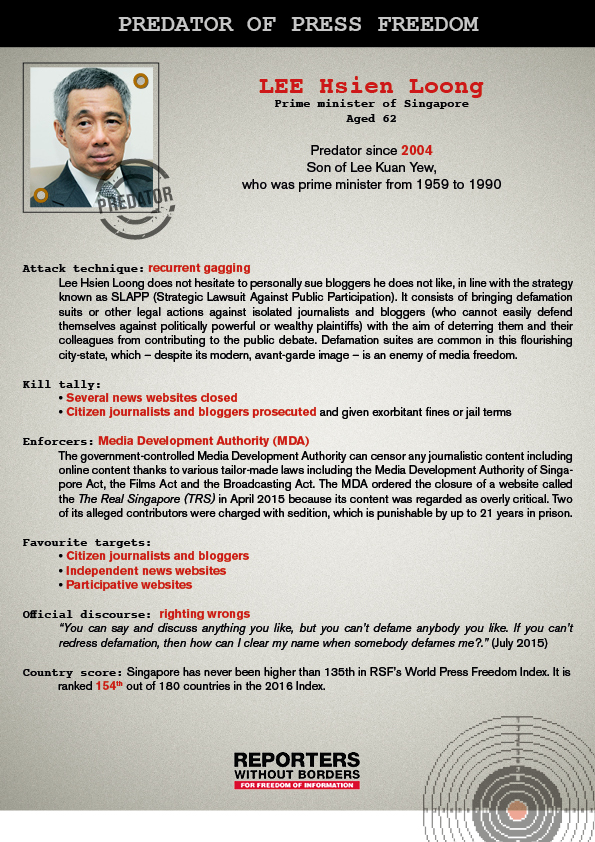 Here is the full text from RSF, in case you cannot read the above:

ATTACK TECHNIQUE: Recurrent gagging – Lee Hsien Loong does not hesitate to personally sue bloggers he does not like, in line with the strategy known as SLAPP  (Strategic Lawsuit Against Public Participation). It consists of bringing defamation suits or other legal actions against isolated journalists and bloggers (who cannot easily defend themselves against politically powerful or wealthy plaintiffs) with the aim of deterring them and their coleagues from contributing to the public debate. Defamation suites [sic] are common in this flourishing city-state, which – despite its modern, avant-garde image – is an enemy of media freedom.

OFFICIAL DISCOURSE: righting wrongs – “You can say and discuss anything you like, but you can’t defame anybody you like. If you can’t redress defamation, then how can I clear my name when somebody defames me?.” (July 2015)

COUNTRY SCORE: Singapore has never been higher than 135th in RSF’s World Press Freedom Index. It is ranked 154th out of 180 countries in the 2016 Index.

The Singapore Government has always had an unsavoury relationship with RSF. Singapore has continuously been ranked poorly in the World Press Freedom Index that has been published by the RSF since 2002.

As it pointed out in the Lee infographic, RSF ranked Singapore at 154th spot in the Index in 2016. The Republic dropped one notch from the 153rd place it held in 2015, and 14 spots from the 140th place it occupied a decade ago, in 2006. RSF explained the ranking for Singapore as such:

“The Media Development Authority Act, the Films Act and the Broadcasting Act empower the Media Development Authority (MDA) to censor journalistic content, including online content. In April 2015, this government agency ordered the closure of The Real Singapore (TRS) news website because of content regarded as overly critical. Two of its alleged contributors were accused of “sedition,” which is punishable by 21 years in prison. Defamation suits are common in the city-state and Prime Minister Lee Hsien Loong has personally brought prosecutions against bloggers.

“It is unfortunately clear that many of the world’s leaders are developing a form of paranoia about legitimate journalism,” RWB secretary-general Christophe Deloire said. “The climate of fear results in a growing aversion to debate and pluralism, a clampdown on the media by ever more authoritarian and oppressive governments, and reporting in the privately-owned media that is increasingly shaped by personal interests.

“Journalism worthy of the name must be defended against the increase in propaganda and media content that is made to order or sponsored by vested interests. Guaranteeing the public’s right to independent and reliable news and information is essential if humankind’s problems, both local and global, are to be solved.”

Clashes between the France-based non-profit and high-ranking members of the Singapore Government are fairly common.

In 2005, former Prime Minister Goh Chok Tong who had, at that time, newly vacated his seat as head of Government, criticised RSF and said during the 5th Anniversary Dinner of TODAY newspaper:

“I have taken the Reporters Without Borders’s Press Freedom Index at face value. It is a subjective measure computed through the prism of western liberals. The Index was compiled based on feedback primarily from fourteen freedom of expression groups and 130 press correspondents. It lacks the careful research of hard data like the World Economic Forum’s Report on World Competitiveness.”

Noting that Singapore ranked below Guinea – a West African nation that killed its own citizens for holding a peaceful pro-democracy rally – Shanmugam said:

“How objective is the criticism of Singapore in relation to press freedom?…I will share with you something that struck me as quite absurd and divorced from reality: there is an organization called Reporters Without Borders. It comes out with a ranking of countries on press freedom. In 2008 they ranked us 144 out of 173 countries, somewhere below Ethiopia, Sudan, Kazahkstan, Venezuela, Guinea, Haiti, and so on.”

In 2014, RSF fired back and criticised PM Lee for initiating a libel suit against blogger Roy Ngerng. Two years later, in 2016, the advocacy group criticised Shanmugam for allegedly treating local blog The Online Citizen unfairly over their coverage of the Benjamin Lim suicide case.

Then last year in Parliament, Shanmugan again rapped RSF for their press freedom rankings and urged Singaporeans to be “discerning” about such rankings that place Singapore behind nations like Pakistan and Afghanistan:

“For example, if I can digress and make a point here, RSF’s (Reporter’s without Borders) ranking on press freedom. I have spoken about this before in 2009. In 2008, RSF ranked us 144 out of 173 countries, below Guinea, Sudan, Pakistan, amongst others. I pointed out in 2009 that IHT (International Herald Tribune) had a news story on Guinea. It was one or two days before I made my speech. IHT said people were being gunned down by “brutal military junta” and women were being raped on the streets, but in RSF’s eyes, their press freedom was higher than ours.”

More recently, during the Select Committee hearings earlier this year on deliberate online falsehoods, RSF declined an invitation from the Government to present their views on “fake news” and said that it would present its views once it sees a draft of policy from the committee.

Citing doubt over the sincerity of the invitation and highlighting the “draconian laws” that curtail press freedom, RSF asserted that the possibly impending anti-fake news bill must not tighten the nation’s gag on dissent.

The committee responded by issuing a press release stating that a top RSF representative waffled on taking the Singapore Government up on its invitation to give oral evidence at the hearings. The committee concluded that the invitation remains open to RSF.Follow us on Social Media