Singapore — As part of his campaign in Kebun Baru SMC, Kumaran Pillai from the Progress Singapore Party (PSP) held a mobile Meet-The-People session (MPS) to understand the grievances of the residents in the area on July 5.

Before the MPS, he visited Mayflower Market and Food Centre once again. However, he was not alone. Fellow PSP member Lee Hsien Yang joined Mr Kumaran in his walkabout, generating much buzz among members of the public.

After stopping by the market, Mr Lee took off while Mr Kumaran continued in his outreach to the residents in the constituency via a mobile Meet-The-People session (MPS). 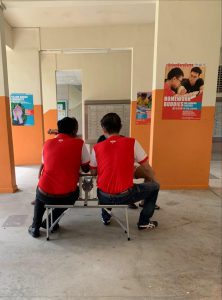 During this MPS, residents voiced out their concerns and worries to Mr Kumaran and his team. Mr Kumaran shared some of these concerns in a round-up video posted on his Facebook page. Some of the issues raised included rental being raised and job losses as a result from both competition with foreigners and Covid-19.

One 64-year-old resident present at the MPS shared her grievances with The Independent SG team. She expressed her disappointment at the unequal development of the residential areas in the constituency. Specifically, she pointed how blocks 245 and 244 were extremely under-developed compared to block 260 (directly opposite block 245 and 244). To her, the former blocks represent the “poor” while the latter represents the “rich”.

She also felt that she needed more aid and vouchers to get by day-to-day, which she feels is currently insufficient. She repeated that she “had not enough money” and wanted vouchers so that she could have enough. She also faced issues with withdrawing money from her CPF, which exacerbates her economic problems further.

After sharing with us, she proceeded to make this known to Mr Kumaran.

Kumaran Pillai will be running against first-term PAP MP’s Henry Kuek. In 2015, Kebun Baru was part of Nee Soon GRC, but has been carved out as an SMC for the coming election. /TISG.