These SMCs are fielding Kumaran Pillai, Kayla Low and Dr Ang Yong Guan and here's the PSP's breakdown on each and why you should vote for them 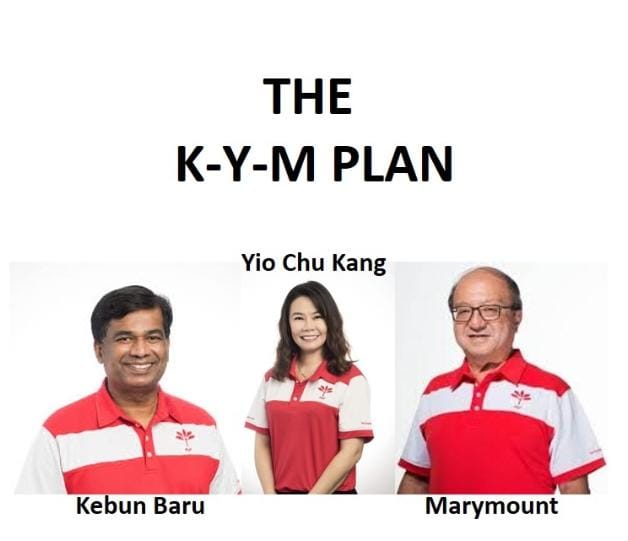 In a Whatsapp message widely circulated earlier today (July 8), the Progress Singapore Party (PSP) shared what they termed as ‘The KYM PLAN’, or the plan for the SMCs the party was contesting.

The message reads as follows:

Friday is polling day. As you take to the polls, there are a few things to take note of.

You are in the midst of creating History! The chances of PSP victories in these 3 SMCs are high and you have to play your part.

Kebun Baru is a unique estate comprising of about 8,000 voters who live in the landed estates, about 2,000 voters living in condominiums and about 12,000 voters living in HDB flats. Kebun Baru has been carved out from Nee Soon GRC for this GE. Prior to that, Kebun Baru was part of Ang Mo Kio GRC. If you want Kebun Baru to remain as Kebun Baru, please vote the PSP candidate, Kumaran Pillai into parliament. This will allow Kebun Baru to remain as an SMC in the next GE after GE2020. (This is according to how Hougang, Potong Pasir and Punggol have remained a SMC when the residing MP was from an opposition party).

Kumaran Pillai is a very well-liked personality and has hit the ground hard with his coverage of the entire constituency. A tireless worker, who was carefully chosen by Dr Tan Cheng Bock to represent you! This is your chance to prove to the government that a minority candidate can be chosen to represent a SMC! A chance to abolish the myth behind the GRC system! Vote Kumaran! Vote PSP!

Yio Chu Kang SMC has this unique opportunity to choose between two political newcomers. It’s your chance to choose Kayla Low Shu Yu of the PSP to represent you. Ms Low has made her presence felt since the announcement of her candidature for Yio Chu Kang SMC. She also has a strong grassroots team to support her just like that at Kebun Baru and Marymount.

Let Yio Chu Kang remain as Yio Chu Kang for the GE after GE2020 by voting Kayla Low into parliament. She will not disappoint you! Vote Kayla Low! Vote PSP!

Why vote PSP to represent Marymount?

Marymount SMC is a newly carved out SMC from the Bishan-Toa Payoh GRC.

PSP’s candidate for Marymount, Dr Ang Yong Guan, is no stranger to electoral battles as he enters into his third bout with the PAP. As a psychiatrist, he is able to understand and empathize with residents on their needs and wants. Marymount voters could have caught him during his campaign trial and would be able to attest to his humbleness and good virtue.

Marymount SMC will be keenly watched by the rest of Singapore. The previous MP, Ms Josephine Teo had left Marymount for Jalan Besar GRC. This has created a chance for Marymount voters to create history by voting against an ex-General. Ms Gan Siow Huang, had left the military to contest this elections under the PAP banner. Do we need another military general in parliament?

This is a chance for Marymount SMC to give a referendum to the government that says “No more Military Generals in Parliament”! The PAP will have to review their recruitment process after her defeat! Only the Marymount voters can do this!
Vote Dr Ang! Vote PSP!

KYM – with victories for all 3 PSP candidates in Kebun Baru, Yio Chu Kang and Marymount, you will be sending a clear signal to the ruling party that the country belongs to all of us and not just to an exclusive few! Your chance to form a new KYM Town Council! Make your vote Count!

You Deserve Better!
Vote PSP!”Follow us on Social Media