On Oct 29, the the administrator of the fanpage, Jason Chua Chin Seng, uploaded an uncensored photo of the child on social media and said that the child was raising his middle finger although some netizens say he could have been showing a peace sign

The fanpage has an axe to grind with non-ruling party politicians and their supporters simply due to their opposition to the People’s Action Party (PAP). On Tuesday (29 Oct), the the administrator of the fanpage, Jason Chua Chin Seng, uploaded an uncensored photo of the child on social media and said that the child was raising his middle finger.

He wrote: “#middlefinger was given. For the record, I tried to inform Pritam, but he had banned me ages ago. I cannot comment or send him messages.”

Upon closer inspection of the photo, many netizens felt that the young boy could be holding up the peace sign – with his raised index finger concealed behind his middle finger due to the angle of the photo – or could have been scratching his face at the moment the photo was taken.

Calling on the fanpage to take down the post, several netizens called Jason’s post “distasteful” and said that he stooped too low in using a child to attack the WP. Netizens also slammed Jason for harassing a child and pulling a child into politics: 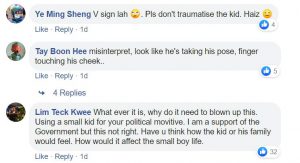 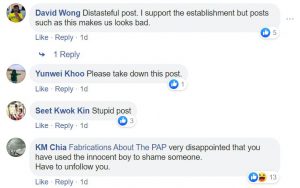 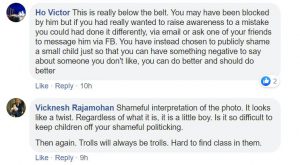 This is not the first time the page has attacked the WP. In the past, Jason was accused of launching a series of fake news attacks against WP chief Pritam Singh: