Priyanka Chopra’s biggest revelations in Unfinished; from being told to show skin to dealing with plastic surgery rumour 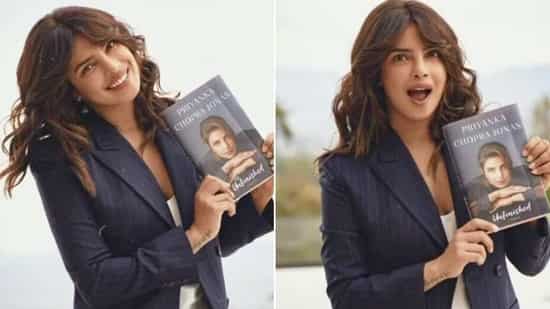 While Priyanka refrained from revealing names, she did blow the lid off many ills of the entertainment industry, such as misogynist filmmakers and entitled actors.

Here are some of the biggest revelations Priyanka made in Unfinished:

In the book, the actor wrote about romantic relationships in her 20s and 30s. “I’d get involved with a wonderful man and we’d have a lovely time, usually for a period of years. By the end of the relationship, though, I’d have lost myself somehow. I’d be exhausted, discouraged and disappointed and I didn’t know how I’d gotten to such an unhappy place,” she wrote, according to Open magazine.

She’d also revealed that after one particular break-up, she was particularly gutted, as it coincided with the start of the second season of her television show, Quantico, and came at a time when she was still reeling from the death of her father, Ashok. “When I wasn’t feeling numb, I felt lonely, sad, and isolated. No one understood what was going on inside me, because I didn’t tell anyone,” she wrote in her book, according to E! News. She did not even confide in her mother, Dr Madhu Chopra.

She wrote, according to People, that when she was in her 20s, it was discovered that she had a ‘polyp’ in her nasal cavity. Believing it to be a routine procedure, Priyanka decided to have the polyp surgically removed. This was in 2001, the year after she won Miss World, and around when she decided to take a plunge into the film industry.

She wrote, “While shaving off the polyp, the doctor also accidentally shaved the bridge of my nose and the bridge collapsed. When it was time to remove the bandages and the condition of my nose was revealed, Mom and I were horrified. My original nose was gone. My face looked completely different. I wasn’t me anymore.” Priyanka continued, “I felt devastated and hopeless. Every time I looked in the mirror, a stranger looked back at me, and I didn’t think my sense of self or my self-esteem would ever recover from the blow.”

As a result of the botch-up, the tag ‘Plastic Chopra’ was given to her in the media. Priyanka wrote that while she was ‘dared’ to give an explanation for her ‘obviously different nose’, she chose to ‘draw a line’ and not speak about it publicly.

She wrote, “I decided that there was a line I was going to draw in my life. I am an entertainer. That’s what I’ve signed on to do, and that’s what I love doing. I will say my lines, dance my dance, hit my mark. I’ll do my best to make you laugh, and I’ll do my best to make you cry, but just because I’m a public person doesn’t mean everything about my life has to be public knowledge. I get to choose what I share and when I share it.”

Priyanka ended up getting corrective surgeries to fix the damage done. “While it took a few years of seeing a stranger gazing back at me every time I looked in the mirror, I’ve gotten accustomed to this face. Now when I look in the mirror, I am no longer surprised; I’ve made peace with this slightly different me,” she wrote.

According to Zoom, Priyanka wrote about an incident during the filming of a seductive song sequence that required her to strip off her clothes, one item at a time. Because it was a long song, Priyanka asked the director if she should wear extra layers, so that she wouldn’t be ‘down to skin way too fast’.

“The director suggested I speak to my stylist, so I called him and briefly explained the situation, then passed the phone to the director. Standing right in front of me, the director said: “Jo bhi ho, chaddiyan dikhni chahiyen. Nahi toh log picture kyon dekhne aayenge?” which translates as “whatever happens, panties should be seen. Otherwise, why would people come to watch the movie?” wrote Priyanka.

She wrote that she quit the project the next day. “I was ready to go full-out as a temptress in the number. The director’s words and tone, though, conveyed that he regarded me in a way that I found unacceptable,” she added. Priyanka wrote that her decision to bow out left the director livid, and he paid a visit to her on the sets of another film in an ‘agitated’ state. Her co-star, Salman Khan, had to intervene.

Priyanka also wrote about being objectified by the very first filmmaker she met with after being crowned Miss World in 2000. According to The Independent, Priyanka wrote, “After a few minutes of small talk, the director/producer told me to stand up and twirl for him. I did. He stared at me long and hard, assessing me, and then suggested that I get a boob job, fix my jaw, and add a little more cushioning to my butt. If I wanted to be an actress, he said, I’d need to have my proportions ‘fixed’, and he knew a great doctor in LA he could send me to. My then-manager voiced his agreement with the assessment.”