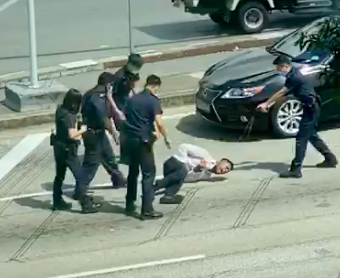 Singapore — In a viral video circulating on both social media and Whatsapp Messenger, police officers can be seen struggling with a man walking about aimlessly and in a dangerous manner at a road junction.

In the two-minute-long clip, circulated on Friday (Aug 21), the man can be seen in the middle of the road at the junction of Esplanade Drive and Fullerton Road. Police officers try in vain to direct the man, clad in white shirt and black trousers, to the side of the road and out of danger.

The attempt involves at least six officers. The man continues to be uncooperative and aggressive towards the officers. One of them then uses a taser in an attempt to subdue him. The struggle continues and the man is seen pulling at the taser wires, getting onto his feet and running across the road. He tears off his shirt along the way. Police officers give chase and have to use the taser again in order to use restrain him. In another viral video, the bare-bodied man can be seen lying on the side of the road, presumably after he has been tased a second time.

During the incident, the man assaulted and injured two police officers.

In a statement, the police gave details of the case and clarified the basis for any use of force in such situations. It said officers had to use the taser twice on the man because, when it was used the first time, one of the probes was dislodged, limiting its effectiveness.

The statement added: “The man was arrested for disorderly behaviour, voluntarily causing hurt to public servants and alleged consumption of controlled drugs. He is also wanted for an outstanding warrant of arrest.”