Singapore’s founding prime minister Lee Kuan Yew’s grandson, Li Huanwu, was one of the attendees of Pink Dot 2018 – an annual LGBT pride event that celebrated its tenth anniversary this year. The son of Lee Hsien Yang, 31-year-old Huanwu was accompanied by his partner, Yirui Heng.

Earlier in July, Huanwu publicly came out of the closet as he and his partner were featured in the Out in Singapore platform, which aims to foster acceptance and support for “LGBTQ persons who wish to come out to family, friends and peers in the community.” The pair were seen with their arms around each other in portraits shot for the campaign.

While Huanwu has not publicly come out of the closet on such a scale in the past, he has urged Singaporeans to support Pink Dot over the past two years. Last year, Huanwu publicly appealed for members of the LGBT community and straight allies to attend the event in a show of solidarity. For this year’s Pink Dot event, Huanwu urged netizens to “be there” as well.

Meanwhile, a photo capturing Huanwu and Yirui at Pink Dot 2018 has been going viral online after it was posted online by Facebook page ‘Dear Straight People’. The photo, which shows Huanwu embracing Yirui while planting a kiss on his cheek, has drawn mixed reactions online.

Several netizens extended their support for Huanwu, with many commenting on the post with heart- and love-themed emoticons and gifs.

The photo, which has garnered over 1,300 reactions and over 300 shares on Facebook, also saw some netizens thanking Huanwu for his support while others called on the Government to repeal Section 377A – a law that criminalises sex between men.

Although it is not strictly enforced, the Government has declined calls to remove the section from the law completely.

As expected, some others used the platform to share why they do not support LGBT issues: 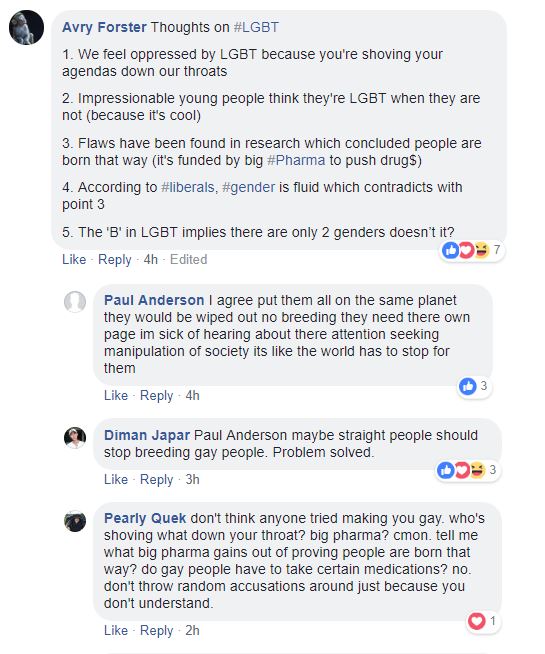 Meanwhile, some other felt that there is no reason to highlight Huanwu’s participation at the event. Noted human rights activist Braema Mathi was once such voice who urged others to just let Huanwu be:

https://theindependent.sg.sg/lee-kuan-yews-gay-grandson-publicly-comes-out-of-the-closet/Follow us on Social Media