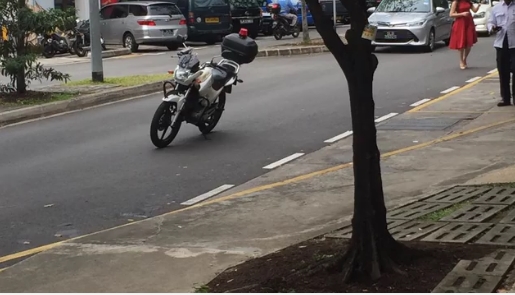 Zachary Lee alleged on Facebook on Tuesday that a Land and Transport Authority’s outsourced parking enforcement officer parked his motorcycle right in the middle of the road at the famous Tiong Bahru market to carry out his enforcement actions.

When when vendors confronted him and asked him to move the vehicle to the side of the road so as not to obstruct traffic, the officer allegedly refused to do so, insisting that he had the right to put his vehicle right smack in the middle of the road.

The incident allegedly happened today (30 Aug) at about 11.10am. Posting in the Facebook page of Roads.sg, Zachary said: “nearby stall vendors were seen reasoning with this personnel and requested that he move his motorcycle nearer to the pavement. However, they were given threatening remarks like: “You want to complain, then you go and complaint lah. Why are you all taking photos? I come here everyday you know, I will come everyday and fine your customers’ vehicle that park here, i tell you.””

LTA has denied that the officer in question is not a staff of one of their outsourced contractors, but HDB has confirmed that he is one of their own – and he almost did the right thing.

HDB clarified in a Facebook note that the officer involved is a staff of its appointed car park operator.

HDB further clarified that prior to this incident, it had received feedback on illegal parking at the taxi stand and along the double yellow lines at Seng Poh Road. The action by the officer is part of HDB’s regular and routine enforcement checks in the area as this is a busy street.

HDB clarified that the parking enforcement officer had parked his motorbike next to an illegally parked car so he could carry out enforcement action, and that the video circulating online showed the events that occurred immediately after the driver had driven off. It gave the false impression that the enforcement officer’s bike was parked in the middle of the road, HDB said.

The officer was however wrong in not following proper operating procedure in such a situation. The officer should have moved his motorbike away immediately after advising the illegally parked cars to move, to avoid obstructing traffic.

HDB apologised for the inconvenience caused arising from the incident. It has asked the car park operator to improve their enforcement process.