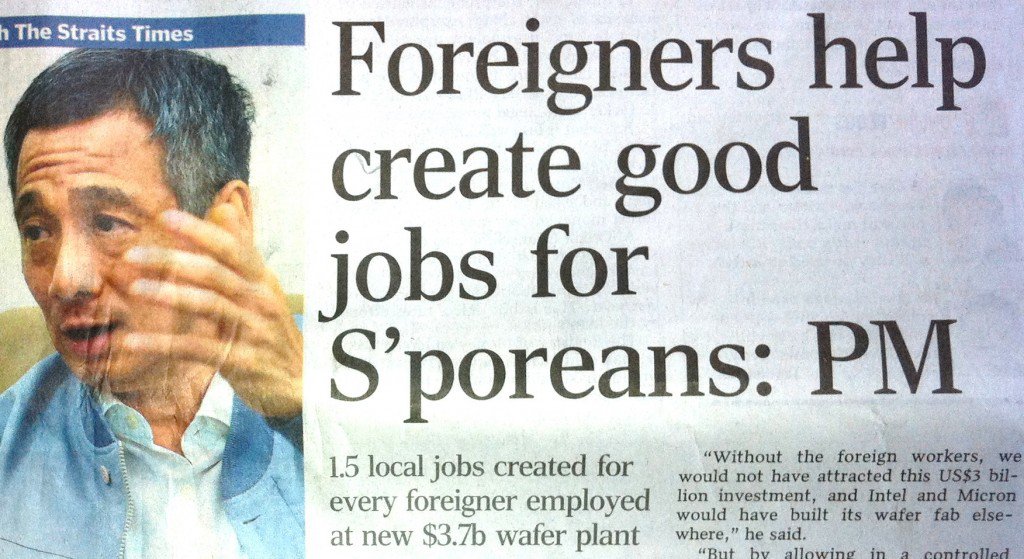 PM Lee once anyhow claimed that foreigners help create good jobs for Singaporeans but of course he din offer any supporting statistics.

Hard to trust this type of leader because he misled the people by quoting statistics on only one new fabrication facility. PM Lee could not cite statistics on the general job market because he would have shot PAP in the foot.

But people got eyes and can see that foreigners are holding managerial and supervisory positions in the F and B sector while Singaporeans are working under them. Who got the good jobs?

Even banks like Stanchart, 18% owned by taxpayers through Temasek, employs only 20% of Singaporeans in top management positions in its Singapore office.

Maybe it’s OK for PAP to continue concealing tons of embarrassing statistics from the people because most don’t want to know the facts and want to remain in a state of bliss. So easy for PAP to remain in power, forever.

Today, MEWR Minister Masagos not pai seh to announce “Our Tampines Hub will create 900 jobs”. More tax dollars then spent printing flyers which have been handed out to thousands of units in Tampines. But Singaporeans should not jump for joy because these jobs are designed for retiree uncles and aunties and of course foreigners.

Retrenched PMETs can continue to focus on driving taxis for a second career, over qualified as they may be. Being a real estate agent is no longer an option because the market is now as silent as a cemetery.

Looking at PM Lee’s “good jobs” (below) created by foreigners, I think he meant created for foreigners.

Can a Singaporean family survive on such wages? Is there a possibility of retiring before one reaches 80 or 85? Should Singaporeans continue to beg PAP for handouts?Follow us on Social Media