Home News Featured News PAP grassroots leader asserts that Government should not be asked to protect... PAP grassroots leader Eunice Chia-Lim has riled many Singaporeans after she wrote on social media that the Government should not be asked to protect locals from foreign competition since this would reduce the attractiveness of Singapore in the eyes of foreigners which would, in turn, mean that there are no good jobs here.

Eunice had been referring to an article by an economics and industrial relations professor at Nanyang Technological University (NTU) who tackled the issue of why companies here still hire expat staff even though they seem to cost more.

In his piece, the professor concluded that the gap between the pay expatriates working here earn and the salary Singaporeans earn is not so large when you take funds that go into local employees’ Central Provident Fund (CPF) account into consideration. 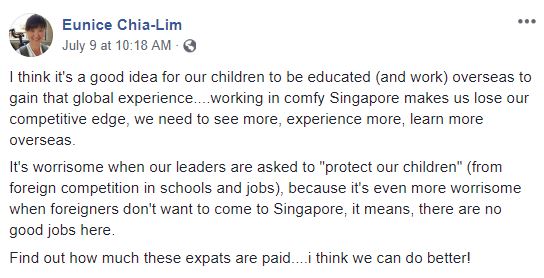 This is not the first time that the ruling party supporters has made waves for her Facebook comments. Weighing in on Amos Yee’s infamous youtube video post-Lee Kuan Yew’s death in 2015, Eunice quoted bible verses to make the point that the people must be subject to the government.

She also quoted a bible verse and implied that “the rod” would drive the “foolishness” out of Yee: 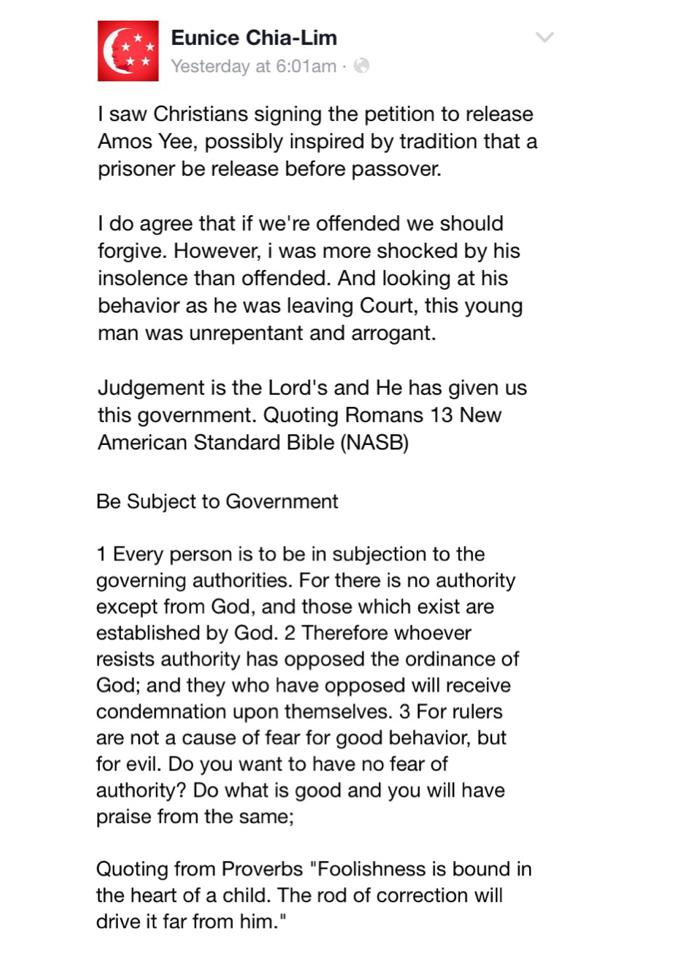 Besides being a PAP grassroots leader, Eunice is the sister of Singapore’s first wheelchair-bound parliamentarian, Nominated Member of Parliament Chia Yong Yong.

Chia shot to notoriety during the Budget Debate in March 2015, when she opposed giving CPF members greater flexibility of choice in the use of CPF savings:

“We have heard proponents who say that the CPF monies is theirs. ‘It’s our money, it’s in our account, it’s our retirement money. I want it out, I will spend it anyway we want.” Fine. Is it our money? Our CPF savings are enhanced and forced CPF savings which are accumulated through our own deferred consumption, through co-payment by our employers and through top-ups from public funds. Is it really my private money? Do I have the right to spend it the way I would spend my own salary? I’m not entirely sure…”

Former NMP Calvin Cheng was one prominent voice that criticised Chia’s speech then: 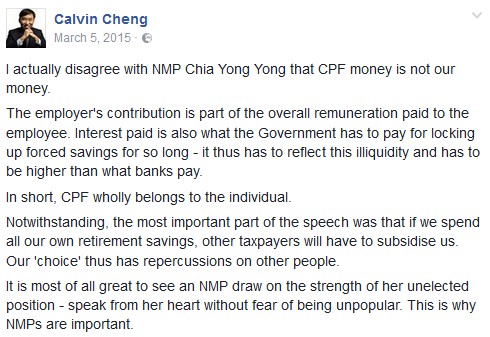 The ensuing public outrage that arose after Chia’s speech was so notable that Minister Tan Chuan Jin had to assure Singaporeans a year later that CPF savings are their money.

More recently, Chia made headlines last year when it was revealed that she was one of the members in now-President Halimah Yacob’s election team during the reserved Presidential Election 2017 that President Halimah won by walkover.

Gap between expats’ pay and Singaporeans’ pay not so large when you take CPF into account: NTU professor