"...the PAP counting agents suggested taking a group photo with us, which I thought was a great idea. The result is a photo of both teams in one shot - showing that regardless the colour we wear, we're all Singaporeans for Singapore!" said Jeannette Chong-Aruldoss While the differences between the ruling People’s Action Party (PAP) and the opposition were the focus of the 2020 General Election, as it typically is in all elections, a kind gesture by PAP counting agents at Marine Parade GRC is winning hearts across the political spectrum.

After the polls close, political parties deploy contingents of counting agents to oversee the vote counting process at the various counting centres to ensure that there is no foul play. Counting agents from each party typically stick to their own groups but one group of PAP counting agents touched the hearts of Workers’ Party volunteers when they requested to take a group photo once their duties concluded.

Ex-Singapore People’s Party (SPP) member Jeannette Chong-Aruldoss was among the WP counting agents involved in the incident. Although she has contested elections as an opposition candidate herself, Mrs Chong-Aruldoss did not contest the latest election after she left the SPP last year and instead chose to lead a team of volunteers supporting the WP’s campaign in Marine Parade.

Sharing the group photo, which showed counting agents in both white and blue, Mrs Chong-Aruldoss wrote on social media on, Sunday (12 July): “Sharing one of my best memories from GE2020. After the counting was done, the PAP counting agents suggested taking a group photo with us, which I thought was a great idea. The result is a photo of both teams in one shot – showing that regardless the colour we wear, we’re all Singaporeans for Singapore!” 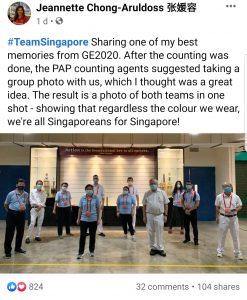 The gesture even won the heart of Marine Parade GRC MP and Speaker of Parliament for the last term of government, Tan Chuan-Jin. In a Facebook post published that same afternoon, Mr Tan wrote:

“Saw our team post this. They’d suggested to take a photo together with their WP counterparts after the counting was over. Really proud of them. They all kept to what we all agreed to do at the start of the campaign. Keep it honourable.”

Mr Tan’s post quickly drew over 14,000 reactions and 1,000 shares within a day. Netizens responding to the post said that the photo warmed their hearts and exemplifies the Singapore spirit.