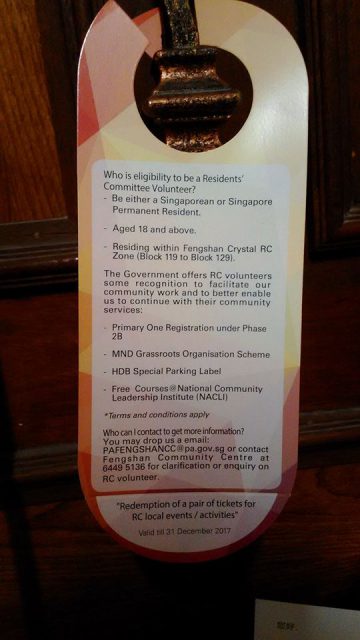 Former Non Constituency Member of Parliament, Gerald Giam, shared a picture of door-hanger leaflet from the People’s Association (PA), advertising perks to entice residents to join the grassroots organisation. The advertisement from the PA’s Fengshan Crystal Residents’ Committee (RC) was targeted at residents living in Blocks 119 to 129 of Bedok North Road.

Mr Giam noted that the PA sees no need to be subtle about the perks its volunteers received.

Seen during house visits today. I suppose there's no need to be subtle anymore eh?

The Workers’ Party Chairman Sylvia Lim had earlier last year charged that the PA was not impartial. Ms Lim cited a personal incident to ask if PA had deviated from its objectives of “fostering cohesion and bonding, and <…>promoting group participation that transcends sectional loyalties”, to advancing the ruling party politically and undermining the work of Opposition MPs. (https://theindependent.sg.sg/chan-chun-sing-asks-sylvia-lim-for-evidence-of-wrongdoing-by-peoples-association).

“If Ms Lim has any such evidence of wrongdoing, you can let me know, and I guarantee you I will follow up. I will be the last person to ever allow the PA to be politicised,” Mr Chan reassured.Follow us on Social Media