OPINION | How do we ensure elderly Singaporeans don’t need to collect cardboard boxes in their twilight years? 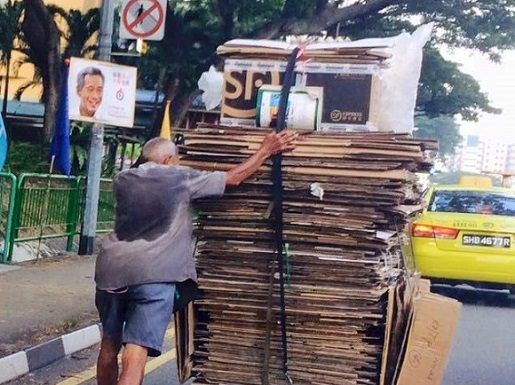 "It is, without a doubt, easier to show off the Marina Bay Sands than it is the number of elderlies collecting cardboard boxes... However, there was inevitably an army of homeless people waiting for you to give your spare change." — Tang Li, OPINION

One of my weekend treats was to pick up a John Grisham novel called “Gray Mountain,” which focuses on a young New York lawyer who gets retrenched from her big law firm and ends up working in the Appalachian Hills. Although I’ve only started the first few chapters, the book has already painted a wonderful picture of how a former “real estate” lawyer dealing with billionaire property developers suddenly discovers people who have no jobs and domestic violence is a way of life.

This fictional account of a Wall Street lawyer in Appalachian country underlines the fact that America isn’t a single country but many countries, where people from different parts of the country have totally different experiences from other people in the same country. This is also not unique to America.

Here in Asia, like in America, the difference is largely centred on the urban-rural divide. For example, when everyone talks about the Chinese economy and the great wealth in China, they are thinking about the shining metropolitan centres of Shanghai and Shenzhen. What nobody thinks of are the rural areas, where people have been so busy worrying about getting flour to make soup to bother knowing about what goes on outside their village.

A Wall Street banker will most likely never have to look at someone from the Appalachian hills in the course of their daily lives. Here is my workplace in the centre of Singapore’s financial district, you have the slick residents of condo-land walking past the aunty from one-room HDB heartland trying to sell them tissue paper just to pay her utility bill.

Countries, like people, want to show the world their best side to the world and wanting to “gloss over” certain realities is understandable. It becomes even more pronounced in places that need the outside world, and governments in such places go to great lengths to “gloss up” their image. My stepfather once made a point that he would only fly airlines of small but wealthy countries because the national carrier in such places were extensions of national pride. Airlines like SIA, Emirates, Cathay Pacific and Qatar consistently rank among the world’s best because they are part of their native lands that governments want the world to see. However, as much as these places are nice, it’s important to remember that these places do not paint an accurate picture of what Singapore is. One of the most visible signs that Singapore isn’t just the glitziest place for Crazy Rich Asians comes in the form of the elderly cardboard box collectors.

It is, without a doubt, easier to show off the Marina Bay Sands than it is the number of elderlies collecting cardboard boxes. I also get wealth inequality. I spent my student days in London, where Daddy had a flat in Soho and I had friends who lived in South Kensington. Money wasn’t an issue for most of the residents. However, there was inevitably an army of homeless people waiting for you to give your spare change.

However, unlike what I saw in London, where the tramps were young and had probably taken a few bad turns with drugs, the ones in Singapore are inevitably old, and they’re begging but doing physically demanding work for criminally low money.

Nobody seems to talk about this group. If you read official news in Singapore, you are bound to think that the Singapore of Crazy Rich Asians is the only Singapore. However, while we may all like to think that, this isn’t reality. I look at my work on Shenton Way and the box collectors, and it’s not far-fetched to think I may end up experiencing a different Singapore in my old age.

We need an honest conversation about what is Singapore. Like it or not, the one-room flat dwellers are as much a part of Singapore as those on the top of Marina Bay Sands. The conversation should move from how do we get more people on top of Marina Bay Sands to ensuring that Singaporeans, particularly the elderly ones, don’t need to collect cardboard boxes in their twilight years. We do so much to create an image, but that image can only be sustained if people feel some reality of that image.