Old letter from Grassroots Leader to PM Lee recirculates; he writes: “I think you, and your top leadership, screwed up big time”

The letter was first published in 2013, and has made its way to social media once again

An old letter to addressed to Prime Minister Lee Hsien Loong, criticizing him for not listening to the people and for the 2013 Population White Paper has re-circulated.

The letter, supposedly written by one of PM Lee’s Grassroots Leaders – although this was never verified – was first published in 2013, and has made its way around social media once again.

In the letter, one Mr. A. K. Tan criticized PM Lee saying that: “Virtually all your PAP grassroots leaders and members were taken aback by the White Paper. And it became obvious very quickly that so were all the PAP MPs”.

His main issue with PM Lee: “why didn’t you listen?”

It projects an increase of 1.6 million people from 2013, or an average of 100,000 more people in Singapore each year. The Population White Paper argued that up to 30,000 new permanent residents and 25,000 naturalized citizens each year are needed to sustain Singapore’s population due to the falling birth rates in Singapore.

It also justified immigration and presence of foreign workers as helping local businesses thrive and “create good jobs for Singaporeans”, something many Singaporeans have expressed disapproval against.

According to Mr Tan, he and the other grassroots leaders disagreed with PM Lee on the White Paper. He asked, “Why did you put the party through this? Did it have to be handled in such a – pardon my language again – incompetent way? And how do you think we, your faithful foot-soldiers, feel ? You put us in the difficult position of having to defend something we did not agree with”. 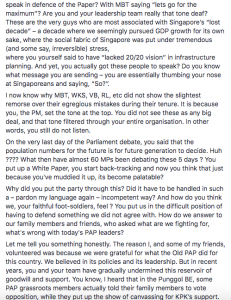 “Let me tell you something honestly. The reason I, and some of my friends, volunteered was because we were grateful for what the Old PAP did for this country. We believed in its policies and its leadership. But in recent years, you and your team have gradually undermined this reservoir of goodwill and support”, he added.

Referring to Ma Chi, the man from the People’s Republic of China who angered the entire nation with the reckless driving of his Ferrari, and caused the deaths of two innocent parties, the letter writer wrote: “It became a symbol of how Singapore threw its door open in wanton abandonment to the rich, and how they lived it up in Singapore”.

He continued, “But just like in GE2011, or Punggol BE, or in the recent White Paper – you do not listen.

At this rate, you will continue to erode the trust (yes, trust) and support of the people. Including people from the older generation who remembered and are eternally grateful to what LKY did for Singapore”.

The man concluded his letter saying that PM Lee did not have to listen to him, but that he needed to find his own channels to listen to the ground.

“Seriously think again about who constitutes your inner circle.

But, listen, you must”, he wrote. /TISGFollow us on Social Media