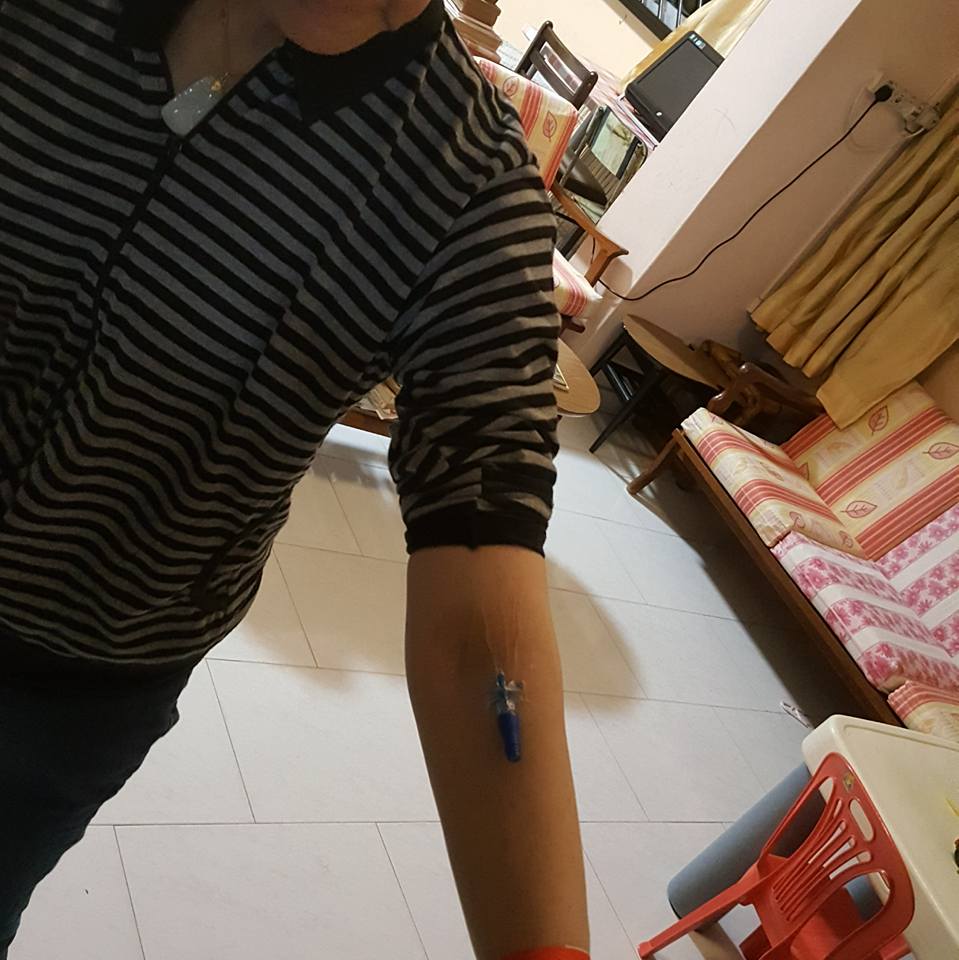 The son of a patient who sought treatment at Ng Teng Fong Hospital yesterday alleged that the hospital forgot to remove an IV needle from his mother’s arm after she visited the A&E department. He added was told it would be easy to remove the needle himself when he reached home and realised what had happened.

The man, William Seah, took to Facebook to express his disappointment with the hospital. He further shared his frustration that his mother who suffered from dizziness and headaches was discharged from the A&E at 3.20am and was only able to leave the hospital at 4am after undergoing administrative processes.

To his surprise, his mother was then given an 8.45am consultation appointment with a doctor that same morning and was told to go home to rest before returning to the hospital.

When Seah questioned whether the appointment could be changed, he was told that it could not be since the doctor would only be available then. When he queried whether his mother could be warded if her condition was so serious she would need to consult with a doctor in just a few hours, he was again told no.

Posting photos of the IV needle in his mother’s arm, Seah shared on Facebook:

“First, you discharged my mother at around 3.20am with all the admin process finished by almost 4am. Without consulting us on the schedule for follow up, you “confirmed” her appointment on the same day at 8.45am! You mean my mum, who just went thru all the A&E treatment with medication, while still suffering from headaches and dizziness, had to be sent home, only to sleep/rest for less than 2 hours, and return back to hospital?
– Asked to reschedule appointment, was told “cannot” because the doctor fixed it already.
– Asked to be warded, so that she could have a good rest, also cannot.
收钱很快, 多做一点 (合理要求) 难?!!
Totally ridiculous!! If it was that urgent to come back for follow up in 5 hours time, shouldn’t she be admitted?

“Secondly, we reluctanly went home, but once reached and when my exhausted mum took off her jacket, only to realise that you left a “present” for her, in the form of needle (for IV) NOT REMOVED!! Called the hospital and was told it was easy to remove by ourselves else have to return to the hospital. My poor mum was already totally drained and still hurting, and you still require her to run up and down like being played.

“HellooOooOOo…we TRUSTED you to take care of the sick and pay the ever increasing medical fees as requested believing that we will be in good hands!! Despite the trust and medical charges, this is the kind of rubbish “professionalism” displayed?

“I would like to think otherwise but it seems like, in my opinion, the so-call medical service that you displayed shows extreme lack of empathy, appallingly unprofessional practices, perhaps because IT WAS NOT YOUR MUM that was suffering, hence the indifference.

‘NG TENG FENG GENERAL HOSPITAL, in my eyes, you are a total disappointment!!”

Seah posted his complaint on Facebook after 5am yesterday. At 7pm on the same day, he updated his post that the hospital has reached out to him and are seriously investigating the matter:

“NTFGH has reached out to me, assuring me that they are looking into this matter seriously. In all fairness, my family and I should give them the opportunity to have a complete investigation and wait for their return statement.

“At the same time, I am very appreciative of the support that everyone has provided. On behalf of my family, I want to give my most sincere thank you! 谢谢大家!”

He provided more detail in a subsequent comment after he received an outpouring of support online:

“Thank you so much everyone for the outpour of care and concern for my mum’s condition. She is doing well now and had went thru her follow up appointment in the morning. Currently all she needs is plenty of rest as the whole episode has been quite exhaustive for her.

“Despite the frustrations that me and my family went thru, in all fairness, I am deeply appreciative of the particular doctor and nurse that had provided treatment for my mum even thou it was late night. The medical remedy provided was very effective in alleviating the pain that she was suffering and prevented a worse outcome. I have to emphasize that throughout the whole process, my mum was being taken care of professionally and in comfort.

“The frustration only began during the discharge process, starting with the, in my opinion, ridiculous scheduling of the follow up appointment. Furthermore, in my eyes, little effort had been displayed to provide alternative solution to our concern, or at least a professional explanation as to why she has to return for follow up so insanely quickly. All was limited to only a simple call at the admin counter followed by “cannot”, “doctor already fixed”. Furthermore, my family and I were not consulted prior to the scheduling. Personally to me, if she was required to return so immediately, why wasn’t she warded so that she can have sufficient rest? Even if there was a vaild reason, why was not an explanation provided to us.

“My bottleneck burst when it was discovered that the cannula (medical needle) was left unremoved from my exhausted after she returned. Furthermore the fury side of me exploded when the call to the hospital resulted in an callous “solution” that it is easy to remove by ourselves before suggesting that we return to the hospital. It was worse than a template or textbook answer. Although I was also anticipating them to say “sorry” and the need to return to hospital, I was expecting at least a more sincere and caring attitude like “We are very sorry but please be careful of the needle.”, “Let her rest, be careful of the needle, return to hospital for our doctors to attend to her.”

“Yes, in a fit of complete anger I posted the earlier FB post in regards to the situation. Since my frustration has somewhat soften (still fiery) and especially my mum is feeling much better now. I felt the need to provide a more balanced view.

“I intend to write in to the quality department of NTFGH to feedback our experience. I am not looking forward to any customer service remedy or compensation even if valid, as I just hope that they can refine their SOP, policies and process so that this extremely unpleasant experience can be much improved.”

*UPDATE 11 Oct 2pm:Have met up with NTFGH senior level management. The discussion was very constructive and held in a…