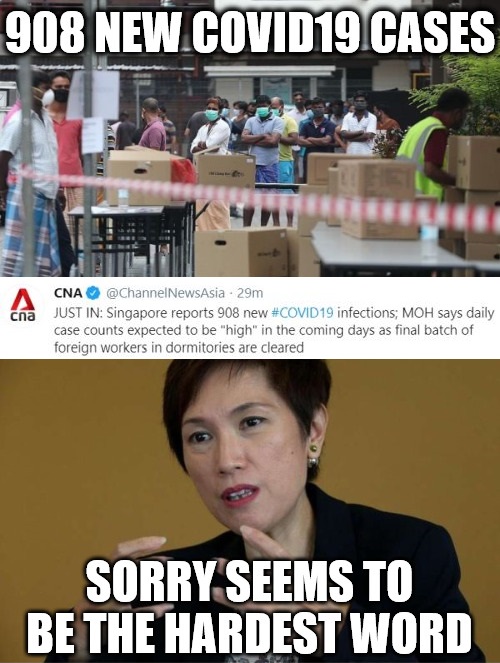 There were 908 new coronavirus cases confirmed as of Wednesday noon (Aug 5), taking Singapore’s total to 54,254.

The vast majority were dormitory residents who were tested during their isolation or quarantine period, even though they are asymptomatic, the Ministry of Health (MOH) said.

Netizens once again called for accountability from Josephine Teo, the Minister of Manpower and Second Minister of Home Affairs. Many blamed her for the high numbers of Covid-19 cases amongst foreign workers and called for her to apologise.

Previously, when activist Jolovan Wham issued an apology to Manpower Minister Josephine Teo over allegations of corruption made on social media, he alleged the minister had “acted improperly and corruptly in relation to the development of emergency housing facilities by Surbana Jurong”.

Mr Wham had been required to make a S$1,000 donation to the Migrant Workers Assistance Fund. His lawyer confirmed that donation had been made.

A netizen, standing in solidarity with Mr Wham, has called the required donation “ironic”.

“It is ironic to demand that one of Singapore’s most dedicated migrant labour activists, who has invested copious amounts of time, energy, passion, labour, money, and risks to his own life, donate S$1,000 to the Migrant Workers’ Centre’s fundraiser.”

The netizen, whose post was published anonymously on the Facebook page of Odette Yiu, pointed out that “MWC is part of NTUC (and therefore a state-sponsored agency)”.

One more irony the netizen mentioned was that Mrs Teo demanded an apology from Mr Wham, and yet she herself has not yet apologised for how foreign workers have been affected during the Covid-19 pandemic.