Netizens call out educator Adam Khoo for sexist comments, latter laughs it off as a joke before apologising

Adam Khoo recently drew much criticism from netizens after making what they considered misogynistic comments.

Khoo, known for conducting educational workshops and learning camps, shared about how a “(fortunately attractive)” woman at airport security patted him down.

His comment that angered many was, “I could see that she was enjoying herself smiling as she caressed my leg”. He concluded his post by saying, “Normally people have to pay money to touch me”.

His post upset many netizens. Khoo’s tuition firm teaches children as young as six years old and many found it inappropriate that an educator would encourage misogynistic views.

Following the backlash, Khoo wrote about how those commenters had “such an inflexible mind that they don’t know how to take a joke”, adding that “they get offended by anything that does not match their perfect model of the world. Very sad people”.

His lack of an apology initially, and attempt to brush-off the matter led to even angrier netizens, who called him out. 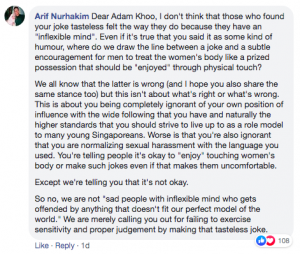 In an update yesterday evening (September 13), Khoo posted a comment apologizing and explaining how his original post was meant in a lighthearted manner, and not to offend. He wrote, “A few days ago, I posted a joke about an observation I had …and had no idea how much of a shit-storm it created online. The funny thing is that the same words I wrote made some people laugh and another group of people got offended/disgusted.

Why would the SAME words cause such DIFFERENT emotions and reactions in people? Indeed it is not the event (words) that determine our emotions BUT how we choose to interpret, give meaning to and respond to an event that determines how we feel and how we act.

Initially, when I read some hateful comments, I felt angry myself as I felt that these people misjudged/misinterpreted my intentions, my values and beliefs.

My intention was purely humour. I have always prided myself as being someone who respects every single person regardless of race, religion or sex. In fact, I have the utmost love, honour and respect for the women in my life. I would not be the person I am today without the love and support from my wife, mothers and daughters. If women lead the world, we would have a lot more peace, love and understanding.

Initially, I responded with anger myself as I felt misjudged/misunderstood. Then I realised that I too had a choice of how to feel and how to respond. I could choose to interpret the hateful comments as attacks against me or choose to interpret it as feedback to change the way I communicated.

As I reflected on my life purpose, I remembered that it was to make a positive difference in people’s lives and to make the world better.

By attacking those who gave negative comments, it justified my actions BUT it hurt those people even more. I disregarded their feelings. It totally went against my life values and purpose. For that, I sincerely apologise. If my words have made anyone feel bad/angry, then I am sorry.

My life’s purpose has always been to empower people to be the best version of themselves and I myself, need to do a much better job at it. I will continue to do my best to make this world a better place and if I do screw up again, do remember to let me know.”

There also exists a thread on popular forum website Reddit dedicated solely to Adam Khoo and the experiences people have had at his workshops.

TISG has reached out to Adam Khoo for comment, who said, ”

As an educator and role model, I acknowledge that my posts could have been made with more tact and sensitivity. I take 100% responsibility for my words and actions.

This has been a learning experience for me and I appreciate the members of public for sharing their experiences and perspectives.

I hope this incident serves as a lesson to all that words have power and to use them with care and wisdom. It is important to respect people’s model of the world.

I would also like to thank my family, friends, colleagues and students for supporting me through this short episode”