Netizen to Khaw Boon Wan: Govt officials should show their solidarity with us by taking the MRT or buses

Singapore—Khaw Boon Wan, the country’s Transport Minister, proposed different ways that commuters can practice social distancing on trains and buses to prevent the spread of coronavirus infections, a concern that many citizens have expressed.

TODAY reports Mr Khaw as saying that commuters need to change some habits first, and advised commuters not to ride public transport such as buses and trains if they are sick, not to talk so much while riding on public transport, as well as to avoid travelling during peak hours.

The Transport Minister made these remarks at a speech at the Bright Hill MRT station, which is scheduled to open later in the year, on Monday (March 23).

Mr Khaw admitted that while he wanted to see social distancing in buses and MRTs, this would prove to be very challenging since big groups of people need to be accommodated at the same time during peak hours,

People who are unwell should not use public transport, Mr Khaw said. “Consult the GP clinic in your neighbourhood, where you can just go down and walk to the clinic. Certainly wear a mask when you do so.”

He then added that commuters should not talk so much while on the bus or train. “Talk softly, if you need to. The best, don’t talk. Close your eyes, relax, meditate. Let the commuters have a quiet journey.”

Thirdly, he said that companies can adopt flexible working hours or work-from-home initiatives, so that fewer commuters would ride public transport during peak hours.

Netizens had a number of reactions to Mr Khaw’s remarks.

One particularly pointed remark came from Nur Hijah, who asked for government officials to “show their solidarity with us by taking the MRT or buses to go to their offices.”

This was echoed by other netizens.

Others offered suggestions such as limiting commuters per train, which would mean more trains and more people with jobs. 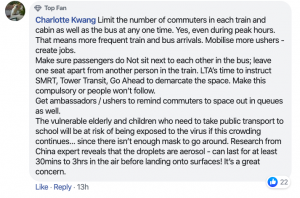 A commuter suggested that people who don’t practice social distancing should be fined.

Others complained about commuters who love to video call during travel.

But Mr Khaw’s suggestion to keep quiet during the commute seemed to please several netizens, who have seen this practiced in Japan and other countries.