The Independent Singapore News
Home News Netizen in queue for McDonald's complains about people waiting in line, a...

Netizen in queue for McDonald’s complains about people waiting in line, a case of the pot calling the kettle black

Singapore—In this day and age, sometimes a callout is a callout, and in other times it a person poking fun at themselves. The only problem is that people, especially on social media, have a hard time telling the difference.

Take one guy who posted some remarks on his Instagram story, seemingly taking aim at McDonald’s customers, which some netizens got offended by. But as it turns out, he was merely being self-deprecating, but the irony was lost on netizens.

McDonald’s, which was closed for a few weeks due to an outbreak of Covid-19 among several of its employees throughout different outlets across the country, reopened earlier this week.

As can be expected, people lined up for their much-needed burger hit, or ordered take home deliveries, which made for long queues.

Presumably to pass the time, our Mr Irony started posting on Instagram photos of the long queue, as well as different people.

His photo with the queue was captioned, “Seriously guys can you all just stay at home or not? Never eat Macdonald’s (sic) will die meh”

He added labels such as “socially irresponsible” along with arrows pointing to people in the queues and counters.

He also posted a photo of his meal (take-away, of course), with the caption, “Finally, after 35 minutes Would have been a lot faster is (sic) people are mature enough to stay at home.”

The series of posts were published on the Facebook account SG Dirty Fella on Wednesday (May 13), and went viral, getting thousands of shares.

Guy labeled others as socially irresponsible on his IG for buying McDonalds when he himself was also one of them… ??‍♂️This post definitely triggered many McDonalds’ Fans with the growing number of shares.

While the individual put up a series of photos on his private account, someone else apparently took screenshots of his pictures and captions.

Netizens were not pleased with the man calling others “socially irresponsible,” when he was doing the exact same thing.

And of course, the inevitable pot-calling-kettle-black accusation was thrown several times, plus other comments along the same lines.

Others commented that he should have just stayed home.

Obviously a lot of people took his post very seriously indeed, and others took offense that he took photos of people and posted them without permission.

However, other netizens pointed out that the man was obviously joking and being sarcastic, and everyone should not take what he said at face value.

But others said that if it was a joke, it was a bit of a fail.

Well, apparently Mr Sarcasm at McDonald’s got the last laugh as he shared the post that had gone viral, with a new caption: “I’m a dirty fella.” 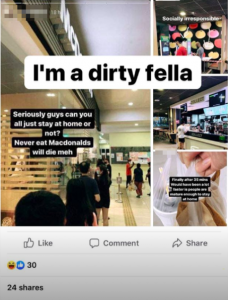