Many thank the man for his service, disapprove of the behaviour of his neighbour A frontliner battling the Covid-19 virus in Singapore faces an ordeal every time he and his family members go home — his next-door neighbour begins spraying disinfecting solution through his gate, uses abusive language and shouts “virus” repeatedly.

The male nurse mentions what he and his family go through in an Instagram post, which was shared by a netizen on Sunday (May 17). 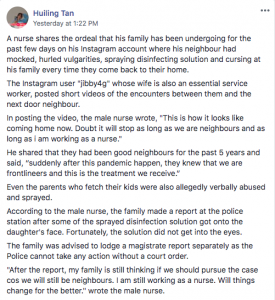 The nurse, whose wife is an essential service worker, shared footage of his encounters with the neighbour.

In one video, his neighbours can be seen standing behind their gate, with a man holding a bottle of disinfectant spray.

In another, the neighbour can be heard loudly saying “virus” repeatedly.

The male nurse said he always found his neighbours waiting at their gate whenever he returned home from his shifts, and that they would often spray disinfectant outwards as he reached his door.

The man added that his young daughter was not spared such treatment. She, too, had had disinfectant sprayed on her but, fortunately, it did not go into her eyes or mouth.

The male nurse said they had been good neighbours for the past five years but that, “suddenly after this pandemic happen, they knew that we are frontliners and this is the treatment we receive”.

“After the report, my family is still thinking if we should pursue the case cos we will still be neighbours. I am still working as a nurse. Will things change for the better,” he wrote.

Those responding to the post thanked the man for his service and were very disapproving of the behaviour of his neighbour. There were those who asked for his address so that they could harass his neighbour, while others urged him to make a police report.