The Ministry of National Development (MND) has drawn intense backlash from netizens after promoting the Lease Buyback Scheme (LBS) on social media.

The LBS allows homeowners to sell part of the end-portion of their lease back to the government to monetise their flat somewhat while continuing to live in the unit without having to sell it off entirely.

The LBS is not a new scheme – it was introduced by then-National Development Minister Mah Bow Tan in 2009 and was only available for those who own small flats – but the government extended the scheme to all Housing Development Board (HDB) flats this year.

The extension of the LBS, which was announced by Prime Minister Lee Hsien Loong in his 2018 National Day Rally speech, came about a year after current National Development Minister Lawrence Wong confirmed that the vast majority of flats will be returned to HDB without any compensation for homeowners, when the 99-year-lease runs out.

Mr Wong’s remarks sparked widespread backlash among Singaporeans who were counting on their flats to continue appreciating in value. His remarks contradicted the Government’s past promises that HDB flats are nest-eggs and assets that will keep rising in value.

Even property agents were not immune to being hoodwinked by the asset enhancement promise and the realisation that the value of HDB will slip over the years caused several disgruntled Singaporeans to liken the Asset Enhancement Scheme to a “ticking time bomb,” “political big bazooka,” and a “scam”.

On Monday (30 Sept), the MND promoted the LBS on Facebook. The majority of netizens responding to the post criticised the scheme.

Some criticised the LBS caveat that those who sell part of their lease to the Government cannot receive the full payment in cash since they need to use the proceeds to top-up their CPF Retirement Accounts. Others opined that the scheme is one is “trying to take seniors for a ride”: 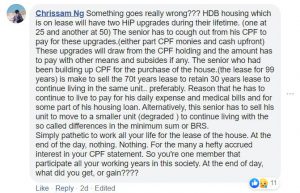 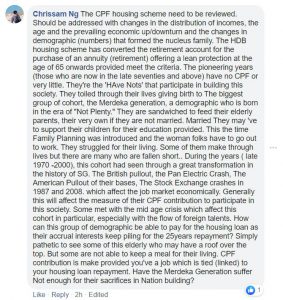