An individual close to the family, Sharanjit Dhaliwal said that Mothership and other publications should be more responsible as amplyfing the video would lead to netizens judging the family without background information

Local media website Mothership has been taken to task by some of its readers over a “distasteful” post exposing a man privately disciplining a young boy in a swimming pool. The article that has drawn flak featured screenshots and gifs of a video showing a man using a cane to keep a young boy in line while he is swimming.

The video appears to be taken surreptitiously, without the knowledge of the man or the young boy. Mothership reported that the relationship between the man and the boy remain unclear and that the video was taken at a local condominium.

Netizens who appear to be familiar with the family, however, have said that the boy is the man’s son.

Revealing that the boy is autistic and that the family is aggrieved by the video and the article highlighting the video, netizens asked Mothership to take their post down and asked why they published the article without investigating the source first.

Facebook user Francis Ong wrote: “Please stop posting and sharing this video.
The family already having a difficult time handling their autistic boy. This is no a easy issue for their family. Please dun added (sic) extra pressure for their family

“To the person who took the video and post (sic) it on facebook, Shame of you. Please understand the fact first before you take video and post it to entertain yourself and others”

Sharanjit Dhaliwal, another netizen who seems familiar with the family, asserted: “Dear Mothership.sg, do you even investigate before posting anything online!? And to the person who took the video and had the audacity to send it to out, shame on you! Invading privacy of others without even knowing any back story. He is one of the most dedicated parent (sic) I have ever seen and I have utmost respect for him and his family.”

When pressed for details on the family’s background, Sharanjit added in a separate comment: “Back story: kid has special needs and the parents take him for a walk/swim every day as part of his therapy. Cane never hits him. This is not easy for the parents too…”

Sharanjit added that Mothership and other publications should be more responsible and criticised the post for amplifying the video, leading to netizens judging the family without background information: 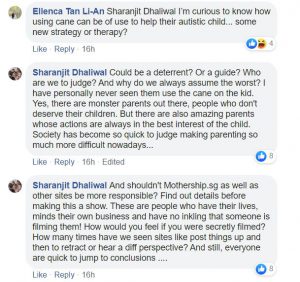 Others responding to its article felt that the article was done in poor taste since it comes off as being ‘judgmental’ without providing context and criticised the person who took the video: