The Independent Singapore News
Home News Featured News Mother of NSF complains that it is “damn ridiculous” that her son...

She complained that the boys were being held back for almost two hours, “at this unearthly hour to check whether they made their beds or swept the floor”

The mother of an NSF took to social media complaining that her son took too long to book out of camp.

In a post on Saturday (Jan 23) on the Facebook page Complaint Singapore, the woman wrote that she found it “damn ridiculous” that the NSFs were held back even on the last day of their 2-years of compulsory training.

In the post that has since been removed, the woman wrote: “Eh I really cannot understand what is going on with SAF. Their timing is +GMT 58 is it?”.

From a photo she shared, the NSF looked to be booking out from Selarang Camp in Loyang. She griped that their sons were being held back for almost two hours, “at this unearthly hour to check whether they made their beds or swept the floor”.

“This “rush to wait and wait to rush nonsense needs to stop””, she said.

The mother’s post was picked up by a Facebook page, The Reservist, which is run by former military personnel.

They responded saying: “I mean…come on, your son is in the MILITARY, not booking out of some MOE ADVENTURE CAMP LEH!!!”

In a comment, they added: “This is the military, and unless it’s ops, cannot always expect clockwork timing. Especially when it is a joyous event like milestone parade when he is probably celebrating”. 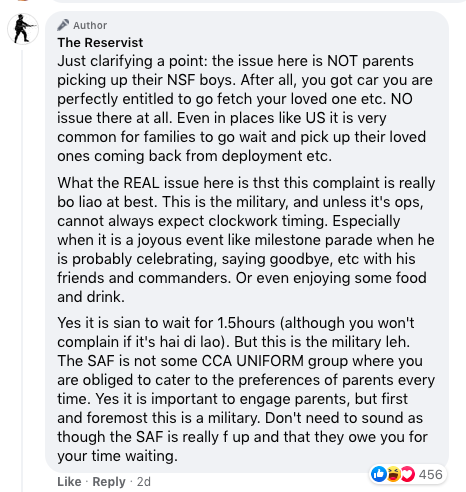 “Yes it is sian to wait for 1.5hours (although you won’t complain if it’s hai di lao). But this is the military leh. The SAF is not some CCA UNIFORM group where you are obliged to cater to the preferences of parents every time. Yes it is important to engage parents, but first and foremost this is a military. Don’t need to sound as though the SAF is really f up and that they owe you for your time waiting”, the group responded.

Netizens who commented on the post also agreed, adding that the woman had a very entitled behaviour.