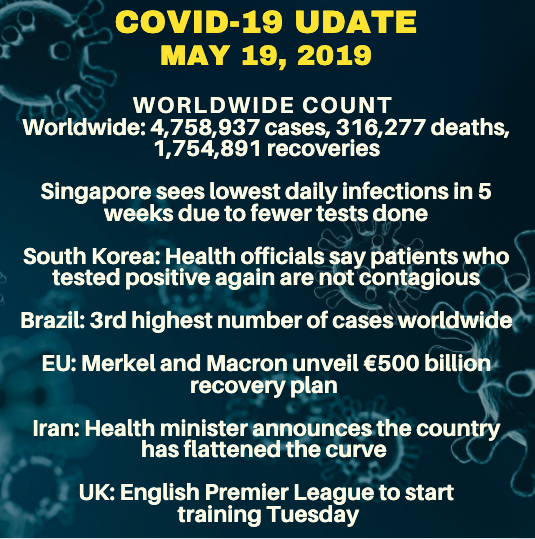 The Ministry of Health (MOH) said on May 18 that there are 305 new Covid-19 cases in the country. Singapore now has a total of 28,343 confirmed cases. There are 495 more people discharged from hospital. A total of 9,835 individuals have recovered.

The low number of daily cases for May 18 is “partly due to fewer tests being processed as one testing laboratory is reviewing its processes following an earlier apparatus calibration issue, and will need time to ramp up its testing capacity,” MOH said.

According to the Korean Centre for Disease Control, patients who have recovered from Covid-19 are no longer contagious even if they re-test as positive for the coronavirus. This finding was based on lab analysis of 108 cases and epidemiology investigations on 285 cases. Almost 800 close contacts of the 285 cases who had tested positive after recovery showed no infections linked to the patients. Because of this, patients are no longer required to be quarantined for two weeks after they are discharged from hospitals or other facilities.

Jung Eun-kyeong, the Director of the KCDC, said that the positive results from re-testing could be because of pieces of dead virus found by the PCR (polymerase chain reaction) tests.

A surge of infections reported on May 18 has pushed Brazil past the UK to become the country with the third-highest number of cases around the globe, following the US and Russia. The country recorded 13,140 new cases within 24 hours, its highest thus far.  Brazil also saw 674 new deaths, for a total of 16,792. President Jair Bolsonaro has been critical of lockdowns and even dismissed the coronavirus as “little flu.” Two health ministers have resigned within a few weeks.

A new recovery plan was announced by German Chancellor Angela Merkel and French President Emmanuel Macron worth €500 billion. In a joint video conference, Mrs Merkel said that the European Commission will be taking loans to boost the economy of the EU, which is badly reeling from the fallout of the pandemic. She added, “To support a sustainable recovery that restores and enhances growth in the EU, Germany and France support an ambitious, temporary, and targeted recovery fund. The recovery fund of 500 billion euros will provide EU budgetary expenditure for the most affected sectors and regions.”

Iran: Health minister announces the country has flattened the curve

Speaking at the World Health Organization’s virtual 73rd World Health Assembly, Saeed Namaki, Iran’s Health Minister, said that while the country took a hard hit from the coronavirus pandemic, it has now “managed to flatten the curve.” He added, “I would like to underline the critical importance of global solidarity to overcome the pandemic and ensure timely access to medicines and vaccines. The year 2020 is the year of nurses and midwives. We would like to commend all frontline health workers.”

The English Premier League will begin training on May 20, but in small groups. All 20 groups in the league agreed on this in a recent shareholders’ meeting. No more than 5 players will be on the field, and players will change clothes at home and drive to training sessions separately. In a statement, the league said, “Step One of the Return to Training Protocol enables squads to train while maintaining social distancing. Contact training is not yet permitted. This first stage has been agreed in consultation with players, managers, Premier League club doctors, independent experts, and the Government.” The earliest date that games may resume is June 12.

Read also: Timeline of WHO’s role in the coronavirus pandemic

Timeline of WHO’s role in the coronavirus pandemic