A 58-year-old woman died from the coronavirus infection on Thursday (Apr 28), bringing the country’s number of deaths to 15. 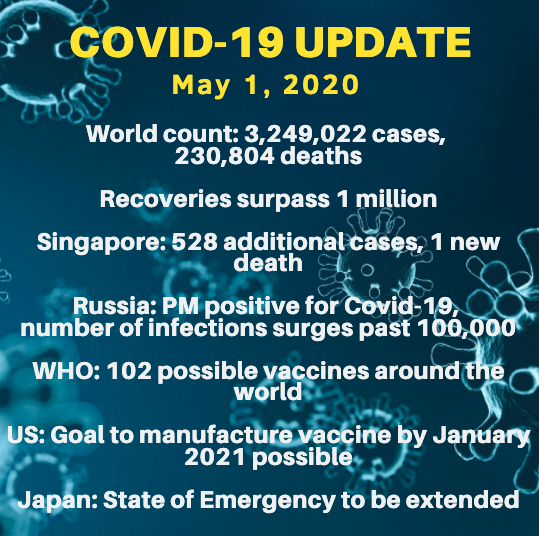 1,006,112 people worldwide have recovered from Covid-19. Italy, one of the hardest-hit countries by the coronavirus, has recently recorded a new record high inpatient recoveries, reaching 75,945. Wednesday (Apr 29), saw 4,693 new recoveries.

The Ministry of Health (MOH) said on April 30 that there are 528 new Covid-19 cases in the country. For one week now, the number of Singapore’s infections has been lower than 1000. The country now has a total of 16,169 confirmed cases, with an additional 56 discharged from hospital. A total of 1,188 individuals have recovered.

A 58-year-old woman died from the coronavirus infection on Thursday (Apr 28), bringing the country’s number of deaths to 15. With all other patients who died falling between the ages of 64 and 95, the latest fatality is the youngest to die in Singapore.

The woman, Case 703, tested positive on March 26, having previously travelled to Europe.

Russia: PM positive for Covid-19, number of infections surges past 100,000

Mr Mihustin’s announcement came at the same time it was announced that Russia’s infections have surged beyond 100,000. In the 24-hour period from April 29 to 30, it recorded over 7000 infections. 1,073 have died from Covid-19. P President Vladimir Putin has said that while this week the situation in Russia remained “very difficult,” the country has managed to slow the rate of infections.

WHO: 102 possible vaccines around the world

There are 102 possible Covid-19 vaccines in development worldwide, eight of which have been approved for clinical trials, including the latest one that came from China this week. The previously approved vaccines have been in trials on human study subjects. Of the seven vaccines in clinical trials, four are in China, two in the US, one in England and another in a combined US-Europe trial.

US: Goal to manufacture vaccine by January 2021 possible

The US’ top infectious disease expert, Anthony Fauci, said it was possible that the US could meet its goal to manufacture a coronavirus vaccine by January, under the Trump administration’s program to accelerate its development, called “Operation Warp Speed.”

Dr Fauci, who is part of that team developing the vaccine, said on Thursday, “We’re in the early phases of a trial — Phase 1. When you go into the next phase, we’re going to safely and carefully, but as quickly as we possibly can, try and get an answer as to whether it works and is safe. And if so, we’re going to start ramping up production with the companies involved. So we want to go quickly, but we want to make sure it’s safe and it’s effective. I think that is doable.”

Japan: State of Emergency to be extended

Japan’s state of emergency, which was supposed to be lifted by May 6, will be extended. Prime Minister Shinzo Abe announced that this is being planned, telling members of the media, “I think it will be difficult to return to normalcy from May 7. We have to prepare for some endurance. I’ll seek the opinions of experts how long it needs to be.” —/TISG