Model took part in Mar 23 fashion show, announced her quarantine over on Apr 3 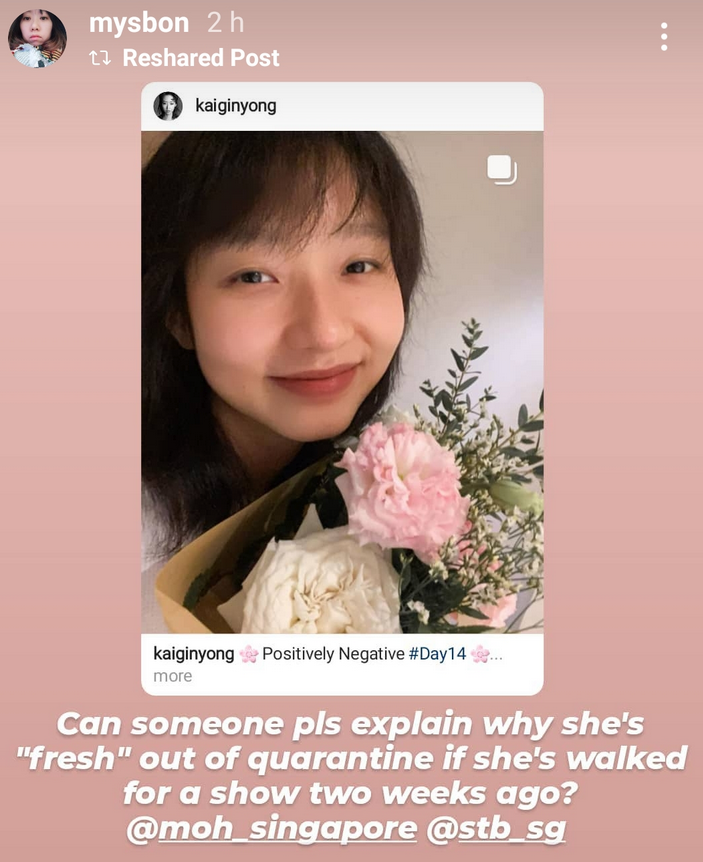 Singapore — Many questions were raised after it came to light that a model from France might have participated in a fashion show in Singapore without serving her two-week Stay-Home-Notice (SHN).

However, in an Instagram post on Saturday (Apr 3), she wrote that she had finished her two-week quarantine since arriving from Paris – indicating that she arrived in Singapore on March 21.

According to the Immigration and Checkpoints Authority (ICA), Singapore citizens or permanent residents returning from France have to take a Covid-19 PCR test on arrival and serve a 14-day SHN at an SHN Dedicated Facility (SDF) and take another Covid-19 PCR test at the end of SHN.

In response to TISG’s queries, the director of a local modelling agency Basic Models, Ms Bonita  Ma, said that models from her agency were present at the Louis Vuitton show. Ms Ma said that all of the models were present at a rehearsal on Mar 22, except for Ms Yong.

According to TISG’s understanding, Ms Yong was allegedly quarantined 48 hours before the show. During the show, she also had to follow specific restrictions such as change clothes in a section specifically allotted to her, she could not talk to anyone or be near anyone and she had to be sent for her quarantine immediately after the show. TISG has reached out to MOH to confirm if there were such restrictions in place.

On Mar 19, France imposed a month-long lockdown on Paris, and as such Ms Yong has to stay in Singapore.

When asked if Ms Yong followed the restrictions, Ms Ma said: “according to my model on set, they actually were quite close to each other when they had to walk out during the fashion show, because there’s only one exit from the backstage to the show”.

Ms Ma said that her agency was not given any notice about Ms Yong’s situation.

“If we knew that she had approval from MOH and STB to do the show, and if someone had informed us, we could at least prepped my models on set to stay a good distance away from her at all times. But honestly, I don’t understand how she could have been allowed in the first place, coming back from a high-risk country like France”.

“Or if she really had to do the show, why didn’t she fly back earlier and serve the 14 days quarantine like everyone did? We really wanted to know too, what were the restrictions she had to abide to on set that day, and if she really did abide to them”, she added.

During the show, there were instances of Ms Yong coming into contact with others.

A video uploaded onto YouTube of the show showed her slipping and falling while walking the runway.

According to a clip taken from a vlog by Jamie Chua, Ms Yong’s fall can be seen where a member of the audience tries to help her up.

She shared Ms Yong’s Instagram post and asked: “Can someone pls explain why she’s ‘fresh’ out of quarantine if she’s walked for a show two weeks ago?” 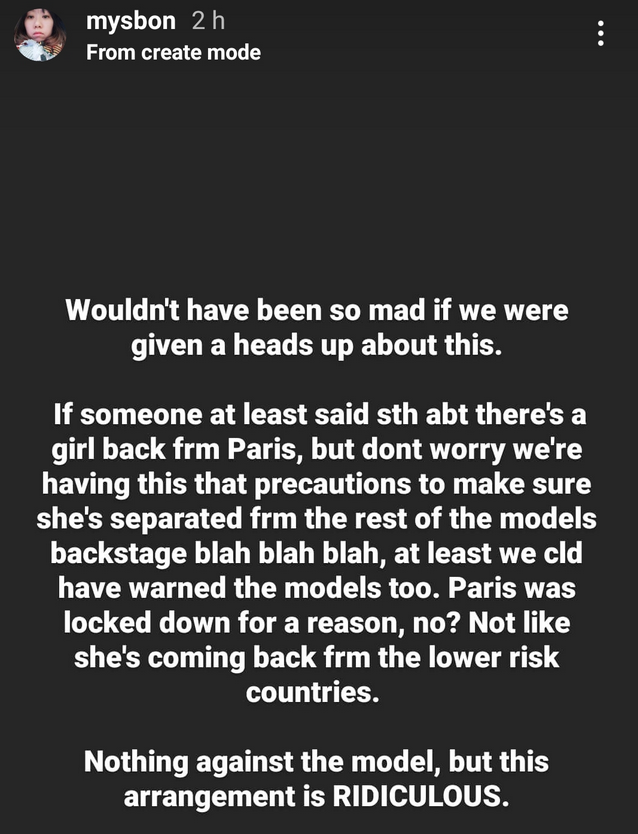 “Wouldn’t have been so mad if we were given a heads up about this. If someone at least said sth abt there’s a girl back frm Paris, but don’t worry we’re having this that precautions to make sure she’s separated frm the rest of the models backstage blah blah blah, at least we cld have warned the models too. Paris was locked down for a reason, no? Not like she’s coming back frm the lower risk countries”, she wrote.

“Nothing against the model, but this arrangement is RIDICULOUS”, she added.

While it is unclear if Ms Yong served her SHN before walking the runway, TISG has reached out to Ms Yong and the Ministry of Health (MOH) for comment. /TISGFollow us on Social Media