According to an audio recording shared by a local online publication, Emeritus Senior Minister Goh Chok Tong appears to have slammed a suggestion to fund elderly pension by cutting million-dollar ministerial salaries.

The former prime minister of Singapore was apparently speaking to grassroots leaders and Government partners at an event on Thursday when he asserted that “ministers are not paid enough!” and that it is “very populist” to demand that ministerial pay be slashed instead.

ESM Goh had been responding to this question: “Can we have some sort of an elderly pensions fund? Perhaps, can I say, cut a bit on the defence? Or perhaps even from the ministers with million-dollar salaries?”

Sharing that he would have applauded the man who asked the question if he suggested that elderly pension could be funded by hiking the Goods and Services Tax (GST), ESM Goh allegedly responded:

ESM Goh’s alleged comments on slashing ministerial pay may be a blow to some who called on him to “do a Mahathir,” given his repeated allusions on social media to the 93-year-old Malaysian leader who united the opposition and toppled the incumbent at the Malaysia General Election 2018.

ESM Goh’s posts referring to Dr Mahathir come a few months after an exchange between ESM Goh and Prime Minister Lee Hsien Loong led netizens to speculate that an internal conflict may be brewing between the pair.

Meanwhile, netizens responding to the audio recording felt that EMS Goh is “still living in his ivory tower” and noted that any image that ministers serve the people to give back to society instead of earning a fat paycheck is effectively destroyed with these remarks: 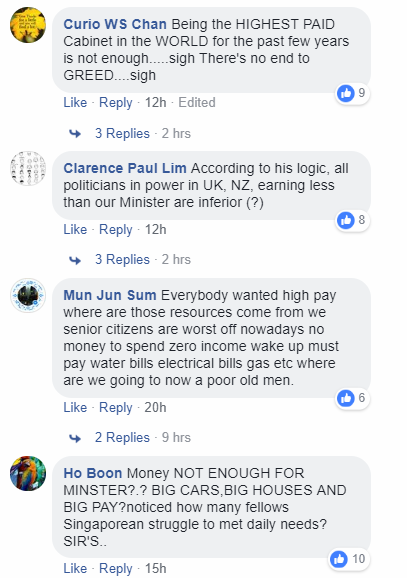