The Independent News
Home News SG Economy MCCY's order: Thou shall only make approved images of thy founding Prime...

MCCY's order: Thou shall only make approved images of thy founding Prime Minister Lee Kuan Yew 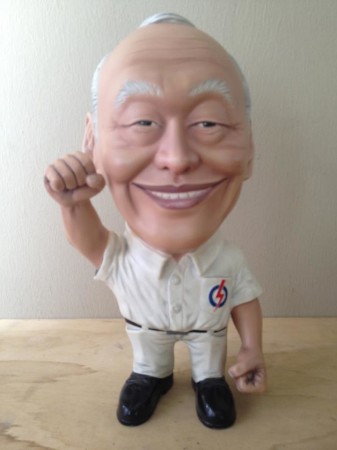 The Ministry of Culture, Community and Youth (MCCY) on Wednesday (16 Mar) set broad guidelines for the usage of image, name and likeness of Singapore’s founding Prime Minister, the late Mr Lee Kuan Yew, for product endorsements or commercial purposes.
MCCY said that the guidelines were meant to encourage the “appropriate use of the name and image of Mr Lee.”
The three broad guidelines set by MCCY are that:

MCCY added that it will continue to monitor the use of Mr Lee’s name and image.
Commenting on the news of MCCY’s guidelines on the usage of Mr Lee’s image, name and likeness, the popular blogger mrbrown parodied the government advice using the Ten Commandments saying:
“THOU SHALT ONLY MAKETH APPROVED IMAGES OF THY FOUNDING FATHER. THE MCCY SHALT MONITOR THY USAGE OF THY FOUNDING FATHER’S GRAVEN IMAGE AND IF IT IS FOUND WANTING, THE HOLY ORDER OF THE MCCY SHALT SURELY SMITE THEE.”

Prominent blogger Andrew Loh also made fun of the new guidelines saying, “because Lee created Singaporeans in his own image and likeness. And thou shall have no other god before Lee.”
Saying that the government guidelines were “stupid and irrational”, Mr Loh pointed out that Mr Lee was not an infallible man, and that his name is synonymous with authoritarianism among some, and worse among others.
Mr Loh further asked, “What does it mean his name “should be accorded dignity and respect”? “Thou shalt not take the name of the lord thy god in vain”?”
He felt that the new rules were utter nonsense.Follow us on Social Media