He followed them into the vehicle and sat opposite them

Singapore—When a woman reached out to Foodpanda after a man wearing a jacket from the company fondled himself on an SBS bus in front of her and her two sisters, the food delivery service said he is a former employee who was fired a month ago.

A woman named Jorene Ng took to social media on Monday (Mar 29) to post photos of the man, who can clearly be seen with his hands inside his pants, staring straight ahead.

Ms Ng wrote that she and her sisters entered the bus before him and he followed them into the vehicle, and chose to sit directly across the three young women.

“He then put his hands in his pants and proceeds himself infront (sic) of us (looking directly at us). We felt disgusted by his actions and approached the bus captain,” she added.

She also wrote that the man was wearing a Foodpanda jacket and tagged the company, hoping the delivery service will take action.

Ms Ng added that the man may be a Bedok resident.

“We are traumatised by his actions and we felt unsafe during that time,” she wrote.

The women then left the bus immediately, but he alighted at the same bus stop.

Fortunately, he went in another direction. 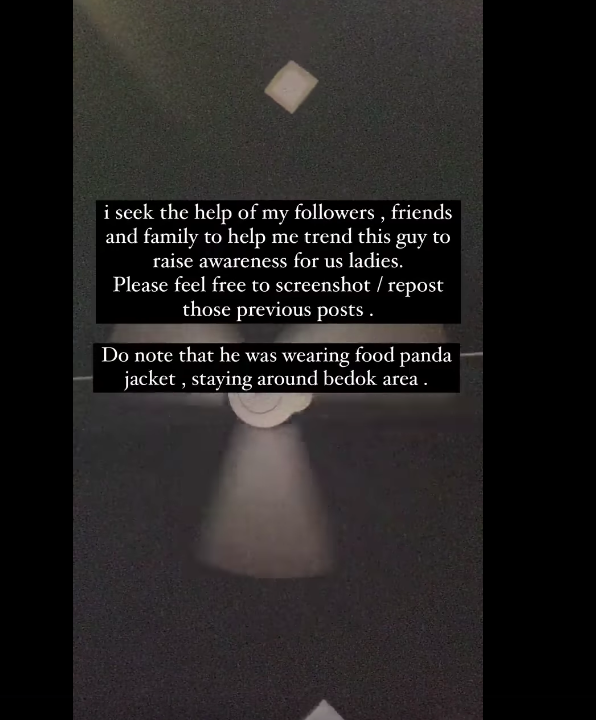 Ms Ng thanked the bus captain for determining that they were safe before driving away.

Interestingly, she added a description of what she and her sisters were wearing, perhaps because women have historically been accused of leading men on by wearing skimpy clothes.

“Should there be any enquiries on what we were wearing, we were all wearing long sleeves and non-revealing clothes. Even if there was any skin revealed, no guys should be doing such act in public. This is such disrespect towards females and is absolutely outrageous.”

Foodpanda told media site Coconuts that the man on the bus had been fired last month. It confirmed that it had seen the video Ms Ng’s posted on Instagram, calling the images “disturbing.”

The company confirmed that the man is a former employee, and added that it has “reached out to Ms Ng to offer our support over this shocking incident.”

Read also: NAFA: Graduate has spoken out on sexual harassment by former staff

NAFA: Graduate has spoken out on sexual harassment by former staff