Man living in Thailand falls down, injures his leg and blames PAP for it

A man living in Bangkok, Thailand, was called out by Singaporeans after he posted images of a fall and injury he had there which he blamed on the People’s Action Party (PAP).

The netizen, Roger Pan, had his post picked up and shared by Facebook page Fabrications About The PAP.

Posted by Fabrications About The PAP on Sunday, 12 August 2018

Pan posted images of a fall he had, apparently while walking on a roof and he captioned his post, “Sawadee i thanks my lucky star i did not fall into this dog hole.
#fuckPAP#fuckLHL#humkarchang*O$P$ VTO2019/2020PAPigs — feeling crazy.”

Netizens banded together and pointed out the outrageous nature of Pan’s comments. 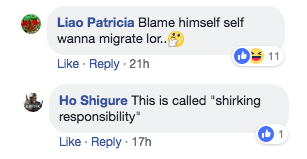 One netizen also suggested that he Pan blamed the PAP because here in Singapore he would never have to fix his own roof and took that privilege for granted.

Besides his injuries while fixing his roof, Roger Pan remained otherwise unscathed.