The Independent News
Home News In the Hood Man accuses St Luke's ElderCare of reusing a mask that his elderly...

Mr Tan alleged that the staff at the centre cleaned up, but still made her reuse her soiled mask

The son of an elderly woman accused an elder care facility of reusing a soiled mask that his mother vomited on.

In a Facebook post on Tuesday (Sep 15), one Mr Tan wrote that his elderly mother was not feeling well and vomited after lunch. He alleged that the staff at the centre cleaned up, but still made her reuse her soiled mask.

“When my Mum helplessly told them the mask was dirty, the staff told her it’s ok and went ahead to reuse the mask”, he wrote. Along with his post, Mr Tan shared a photo of the soiled mask of his mother.

“St Luke’s ElderCare Hougang centre staff at Hougang Ave1 Blk 126 shame on you to treat a helpless elderly with such insensitive & inhuman treatment”, he wrote.

Mr Tan continued: “On other occasions, you also didn’t clean up my mum immediately after she passed motion in her diaper. Leaving this defenseless elderly in her soiled diaper for hours which have (sic) caused rashes. This has happened a few times despite countless feedback”. 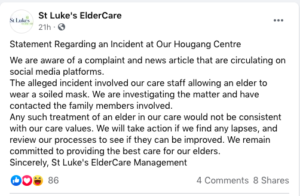 In a statement on their own Facebook page, St Luke’s ElderCare wrote: “We are aware of a complaint and news article that are (sic) circulating on social media platforms.
The alleged incident involved our care staff allowing an elder to wear a soiled mask”.

“We are investigating the matter and have contacted the family members involved.
Any such treatment of an elder in our care would not be consistent with our care values. We will take action if we find any lapses, and review our processes to see if they can be improved. We remain committed to providing the best care for our elders”, they wrote.

TISG has reached out to both Mr Tan and to St Luke’s ElderCare for comment and clarification on the matter. -/TISGFollow us on Social Media