Damanhuri bin Abas reflected on several incidents which he felt were discriminatory and how he wished for change, professing that despite all of this his loyalty to his country remains strong 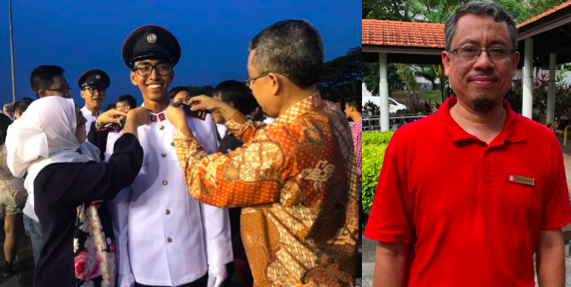 The Singapore Democratic Party’s Central Executive Committee (CEC) member Damanhuri bin Abas wrote on social media that “Malays, still patiently wait for change”. He was referring to the the open secret that Malays are generally not allowed into sensitive units such as much of the navy, air force and certain “elite” units.

His rather heavy-hearted comments come as reflective thoughts in anticipation of Singapore’s 54th National Day.

Explaining about the inter-class games his school held, he said, “Skin colour were (sic) the least concern. We played for class pride. And when it comes to school level, the same applies. When the school wins, the Malays cheered the loudest for the all-Chinese basketball team and the whole school cheered when the Malay boys brought back the south zone soccer trophy”.

“The divide, if there were, were literally academic and purely circumstantial and no one gave a damn”.

When he was put into a different vocation because of his race, he said, “My good Chinese recruit buddy Ming Liang wondered as much. We were separated just when we became blood”.

Mr Damanhuri explained how difficult his National Service period, and National Day celebrations were for him later on.

“It cuts deep for 2.5 NS years and a decade more in reservist but we learned to ignore, move on and mostly forget. The damage is done.

We learned to smile and simply accept the years of Malay-less parachutist on National Day. We still wondered why, protested none. Turned numb, swallowed our pride or whatever’s left of it, looked away.

He added that he was reminded of the discrimination when he attended his son’s Officer Cadet School’s (OCS) ‘Parent’s Visit Day’.

“So 54 years on, Malays, still patiently wait for change, for we are of this land. We smell the sea, taste the soil, hurts, quietly took the shit, now sadly seeing our sons taking the same. Patiently betrayed. (sic)

Nonetheless, loyal we are to this only home we have. One day, when push comes to shove, we will be unafraid, willing to die for our motherland. Only then, my son, we shall rightfully claim our lost dignity and pride we fully deserved,” he wrote.

National Day Reflection: of race and lost waysI grew up in a 1 bedroom HDB flat in Toa Payoh with 8 siblings and my…

Mr Damanhuri expressed similar sentiments when Mr Shanmugam called out Preeti Nair and her brother Subhas Nair for putting out racially insensitive content saying, “When you use 4-letter words, vulgar language, attack another race, put it out in public, we have to draw the line and say not acceptable”.

He responded to Minister Shanmugam saying, “Can the Minister then be consistent and call out the discriminatory practices of his own G (government) for the last 54 years denying Malays full meritocratic access in NS like other races. And please, tokenism don’t (sic) count. In fact it is insulting and more damaging as it allows excuses for such practices to continue quietly. Or should I make a police report against the G (government) as he recommends”.

When asked for his thoughts about the Preetipls video, he told TISG, “This (the video) is a symptom of a deeper hurt the minorities are feeling. When someone uses vulgarities, it shows that they cannot take it anymore. Their outburst is like them saying that it was the last straw”.

“The vulgarities in the video? The message is what is important”, he said. -/TISG