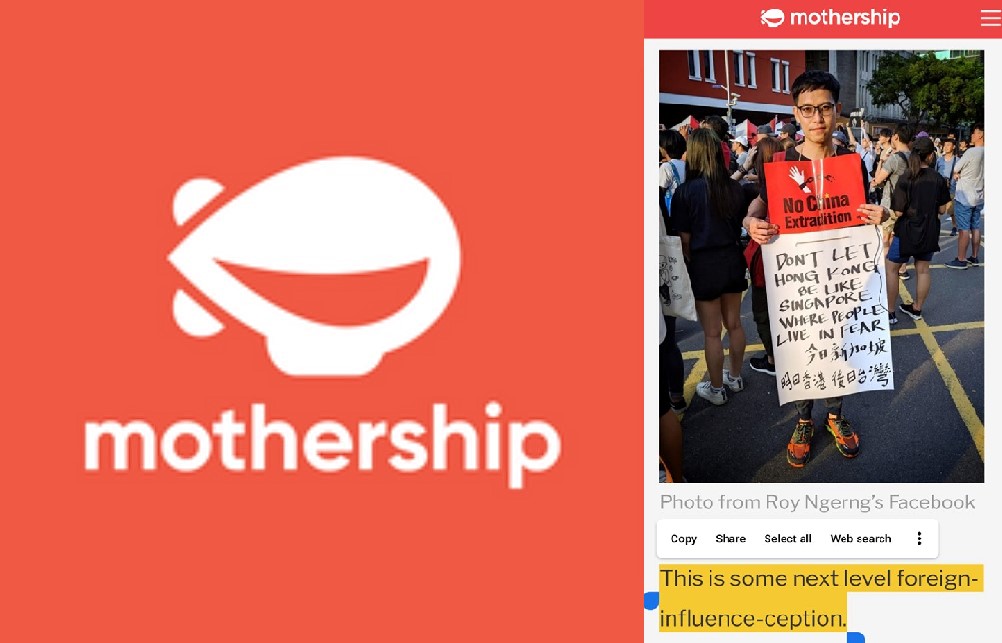 Local activist Roy Yi Ling Ngerng has slammed Mothership.sg for labelling him as a foreign influence in an article covering his presence at the solidarity rally in Taiwan that was organised in support of the protests in Hong Kong against China extradition.

Mothership had said that Mr Ngerng’s support of the Hong Kong’s protests is “some next level foreign-influence-ception” in an article published just three days after Mothership published another report, in which a writer from Hong Kong shared about how the youths in Hong Kong are more attuned to politics and protest in part “to create a better space.”

Praising the first article for allowing the voices of people from Hong Kong to be heard, Mr Ngerng questioned why Mothership would publish such an article in support of those participating in the protest before turning around and comparing his support for the protest to foreign influence.

In a Facebook post published yesterday (19 June), he wrote: “What I want to question Mothership.sg is this – 3 days ago, Mothership decided to publish an article about my support of the Hong Kong protests, and called it: “This is some next level foreign-influence-ception.”

Asserting that there is some level of cognitive dissonance since the publication published an article supporting the protestors while also calling another person’s support foreign influence, Mr Ngerng continued:

Mr Ngerng went on to accuse Mothership of being “PAP-affiliated” and “funded by people connected to the PAP”. Asserting that it is not curious that the publication has “smeared” him since this is the stance the ruling party also purportedly adopts, Mr Ngerng wrote: “Mothership has generally taken a negative position about me because we know they are funded by people connected to the PAP, sure.

“And of course, PAP-affiliated media such as Mothership would position my criticisms of the PAP as negative, and to smear me, because this is the stance PAP has adopted, whether it be the PAP has asked the Mothership to label what I do as “foreign-influence-ception”, only Mothership would know, or be willing to admit.”

Urging the publication to be more consistent, Mr Ngerng said that the ‘foreign influence’ terminology was “created by the PAP to label its critics, and this foreign interference propaganda the PAP has created is aimed at alienating the activist, so as to prevent others to support the critic in question.” He said:

“As such, Mothership comes from the same shameful and embarassing grain as the PAP, where they would label someone as part of “foreign-influence-ception”, but would at the same time, do the same.

“While Mothership would carry an article in support of the Hong Kong protests, they would actually label Singaporeans who protest, and call these Singaporeans name.

“Mothership is therefore complicit in the oppression of Singaporeans and their rights to protest. Why pretend to be liberal while at the same time criticizing Singaporeans who are try to fight for liberal reforms in Singapore? It’s embarrassing.”

Mr Ngerng also revealed that Mothership’s Deputy Managing Director and Managing Editor Martino Tan was his buddy during their Basic Military Training days when they both served National Service.

Opining that Mr Tan “used to be a nice person,” Mr Ngerng said that he feels people change since Mr Tan is now critical of the activist in articles posted by his publication. Mr Ngerng recalled:

“We were in the same camp, same unit, same section, I was on Bed 6, and he was on Bed 5. He used to be a nice person, and still appears nice 4 years ago when I met him at a forum on the CPF. But people change, I suppose.

“He went on the officer track, eventually worked in the prime minister’s office as its senior manager in online communications, and now he leads Mothership, and has written articles about me.

“As someone who knew me, who knew how garang I was as a soldier, as someone who fought for my fellow soldiers, as someone who showed a lot of gratitude while he was my buddy, and as someone who can turn around and write articles that tore me apart, in spite of knowing who I am as a person, this is what the system does to you, I suppose.

“Is it too hard to ask people to not be complicit to the system? Unfortunately, being in Singapore changes you. You lose a part of who you are.”

Implying that the publication could be “complicit to oppression,” Mr Ngerng concluded: “When we are silent or when we use the same language of the oppressors in Singapore to label others, this makes us complicit to the oppression.

“If we do not want to be oppressed, then we have to learn to stop using the same language as the PAP to oppress others. We have to stop using terms like, “foreign interference”, or their propaganda, because in doing so, we are also crippling our own rights.”