The Independent Singapore News
Home News Featured News Lee Kuan Yew 'not quite sold' on idea of 6.5m population for...

Lee Kuan Yew's younger son shared a Straits Times article on the topic dated Feb 2, 2008 where his father had projected for Singapore an optimum population size of five to 5.5 million 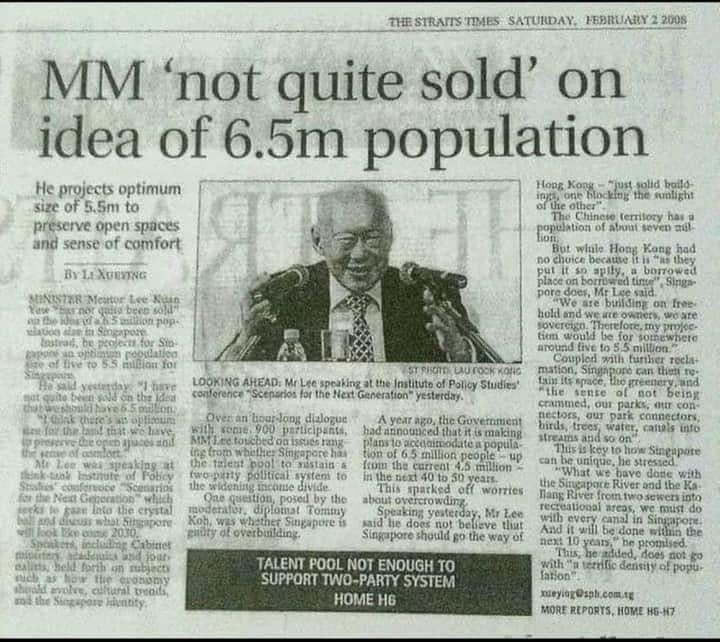 Then-Minister Mentor Lee Kuan Yew ‘has not quite been sold’ on the idea of a 6.5 million population size in Singapore, shared Lee Hsien Yang in a Facebook post earlier today (Jul 28).

He shared a Straits Times article from Feb 2, 2008, where the late Mr Lee Kuan Yew, who was then-Minister Mentor, was ‘not quite sold’ on the idea of 6.5m population for Singapore.

In the Straits Times report, written by one Li Xueying, the late Mr Lee projected for Singapore an optimum population size of five to 5.5 million.

“’I have not quite been sold on the idea that we should have 6.5 million.
‘I think there’s an optimum size for the land that we have, to preserve the open spaces and the sense of comfort.’”, Mr Lee said.
Mr Lee was speaking at think-tank Institute of Policy Studies’ conference ‘Scenarios for the Next Generation’, which discussed what Singapore will look like come 2030.

Amidst worries about overcrowding, the moderator, diplomat Tommy Koh, asked MM Lee whether Singapore is guilty of overbuilding.

The article reported that Mr Lee said he does not believe that Singapore should go the way of Hong Kong – ‘just solid buildings, one blocking the sunlight of the other’.

The Chinese territory has a population of about seven million, the article reported.
But while Hong Kong had no choice because it is ‘as they put it so aptly, a borrowed place on borrowed time’, Singapore does, Mr Lee said.

‘We are building on freehold and we are owners, we are sovereign. Therefore, my projection would be for somewhere around five to 5.5 million.’

He added that it was crucial that Singapore maintains its space and greenery, and said that that concept does not go with ‘a terrific density of population’. /TISGFollow us on Social Media