Lee Bee Wah accuses TOC of spreading online falsehoods; debunks report that football match was called off because of her 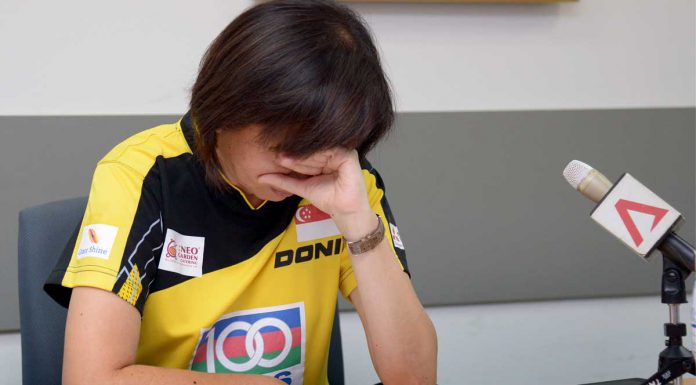 Nee Soon GRC MP Lee Bee Wah has accused socio-political website The Online Citizen (TOC) of propagating online falsehoods, after the group published a report yesterday alleging that a Football Association of Singapore (FAS) match at Yishun stadium was “abandoned” due to instructions by Lee Bee Wah to the stadium’s centre manager.

The article, which was published without a byline, cited “information which has been corroborated” and included allegations by anonymous sources.

The report alleged that the FAS Centre of Excellence U-19 match, that occurred on 10 Apr between Warriors FC and a FAS U-19 side, was “abandoned in the 69th minute” because the centre manager switched off the stadium’s floodlights at 9pm. The report alleged that this was done in accordance with Lee Bee Wah’s instructions, which she gave after hearing complaints about the glare of the lights from residents of The Estuary, a condominium nearby.

The writer of the article authoritatively asserted: “This is the first time that a football match was abandoned as a result of intervention by the MP for the area.”

Sharing a clarification by Warriors Football Club that the match was called off due to floodlight failure, Lee debunked the article on her Facebook page. She wrote:

“Some residents had asked me about an article by The Online Citizen (TOC) which alleged that I had ordered the floodlights in Yishun Stadium to be turned off after other residents had complained about the glare.

“This is not true. I gave no such instructions, and I do not even run ActiveSG or the Stadium! I did my checks and Warriors FC had posted on Tuesday on this matter. I have also requested ActiveSG to check on this matter.

“Despite the Warriors FC post, TOC went ahead to post a falsehood. Unfortunately, this is the danger of online falsehoods now.”

The website published a screenshot of a comment Warriors Football Club manager Paul Poh left on their Facebook page, in which he clarified that the lights were not turned off at the order of any MP. Poh added that the incident could be a technical error, opining that FAS should not have accepted the booking since it is known that the lights switch off at 9pm:

Although TOC published Lee’s response and Poh’s clarification, it also asserted: “TOC understands that the Yishun stadium centre manager had informed the match commissioner of the Tuesday match that there were instructions by the Member of Parliament that the lights are to be turned off at 9pm. This was reflected in the report filed by the match commissioner to the Football Association of Singapore.”

Revealing that they have written to Lee and have not received a response, TOC threw out more questions to their readers:

This is not the first time TOC has been taken to task for publishing misleading reports.

Just last month, the Ministry of Communications and Information (MCI) reached out to the publication with a clarification when the website claimed that the Government is seeking legal redress against Sylvia Lim after she refused to apologise for her “trial balloon” remarks in Parliament.

Curiously, the publication responded by publishing yet another inaccurate statement, even after the MCI clarification, misinterpreting the issue once again.

https://theindependent.sg.sg/did-toc-publish-another-inaccurate-statement-even-after-mci-correction/Follow us on Social Media