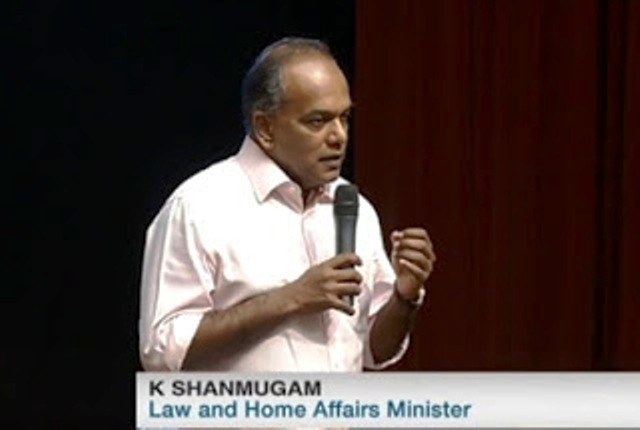 Law Minister, Mr K Shanmugam, has chided an academic from the Lee Kuan yew School of Public Policy. The academic, Donald Low, is an Associate Dean at the School. Mr Low had commented on Mr Shanmugam’s interview to Today newspaper titled, ‘Penalties for crime must reflect public opinion’, and commented saying: “making laws on the basis of public opinion is populism by another name”, and that “[i]f criminal punishments are to reflect only public opinion”, one may as well “[j]ust run an opinion poll each time someone has been convicted”.

Mr Shanmugam charged that Mr Low had seriously misconstrued what he actually said. Mr Shanmugam explained that his comments were the established Government position on penal policy, and how the Government reviewed Singapore’s criminal legislation. He asserted that there was nothing new or novel about it.

The Minister said that Academics, like Mr Low, have every right to criticise statements made by others, especially on issues of public importance. But that academics have a duty to be meaningful, and sensible, without jumping quickly to criticise.

“Otherwise the commentator does no credit to himself or his institution,” Mr Shanmugam said.

< Criminal Law and Public Opinion >Earlier this week, TODAY published an interview I had given (see “Penalties for…

If you can’t read his post, this is what he said.
—
Criminal Law and Public Opinion

Earlier this week, TODAY published an interview I had given (see “Penalties for crime must reflect public opinion: Shanmugam”, 24 April 2017).

Based on the article, some have assumed that I suggested that sentences in individual cases should be dictated by public opinion. Others, such as Donald Low, claim that “making laws on the basis of public opinion is populism by another name”, and that “[i]f criminal punishments are to reflect only public opinion”, one may as well “[j]ust run an opinion poll each time someone has been convicted”.

These comments have seriously misconstrued what I actually said. What I said reflects the established Government position on penal policy, and how we review our criminal legislation; there was nothing new or novel about it.

First, my comments had nothing to do with how individual cases should be decided and what sentences should be meted out by judges. That is and has always been the exclusive province of our courts and judges – who decide based on the prescribed laws, the facts and precedents.

My remarks were about a separate issue, on the factors that Government should take into account when it decides on what conduct should be criminalised; and when it decides on the range of penalties that our legislation should prescribe for different categories of offences.

Second, I was clear that public opinion, while relevant, cannot be the sole or decisive factor in proposing legislation. It is surprising that some like Donald misunderstood what I meant, for the TODAY article clearly stated what I said:

“But it doesn’t mean automatically you agree with [public opinion]. You must assess it, whether it is also fair. So, there are two parts to it – one, whether it is fair; two, what does the public believe is right.”

“It is the task of the Government to decide what is the appropriate legislative provision. And that is the mixture of… what is fair, what is right and also where is the weight of public opinion.”

The article clearly set out what I said should be the considerations for Government, in deciding on legislation (to be moved in Parliament). Government should consider what is right, what is fair, and it should also take into account the weight of public opinion. For example, if an overwhelming majority of the public will not consider some conduct to be criminal, or will consider some conduct to be acceptable, then that is relevant , when deciding whether to put forward a law which criminalises such conduct.

Public opinion alone cannot be the deciding factor – Government has to do what it considers to be right and fair, in the public interest. Public opinion can sometimes be inaccurate, because of a lack of understanding of the facts – and it would be wrong for the Government to simply follow public opinion in all situations. There is a need to assess it, and in the end Government has to decide what, in its view, is right and fair. And explain to the people why such an approach is the right one, in public interest.

Thus, public opinion cannot be the sole or decisive factor. But public opinion is nevertheless relevant. If some law completely lacks public support, and the Government is not able to persuade the public on that law, then that particular law, over time, could become difficult to enforce. (The same factors will obviously also apply when Parliament considers a Bill).

These are common-sensical propositions, and have long been the basis on which laws are passed in many countries, including Singapore. What I said reflects established principles of law making (though I didn’t go into the details, or the full set of considerations). They are not some new-fangled theory.

Academics, like Donald, have every right to criticise statements made by others, in particular on issues of public importance. But to be meaningful, and sensible, it will be first useful to read and understand what has been said, before jumping in to criticise. Otherwise the commentator does no credit to himself or his institution. Particularly an institution which carries Mr Lee Kuan Yew’s name.