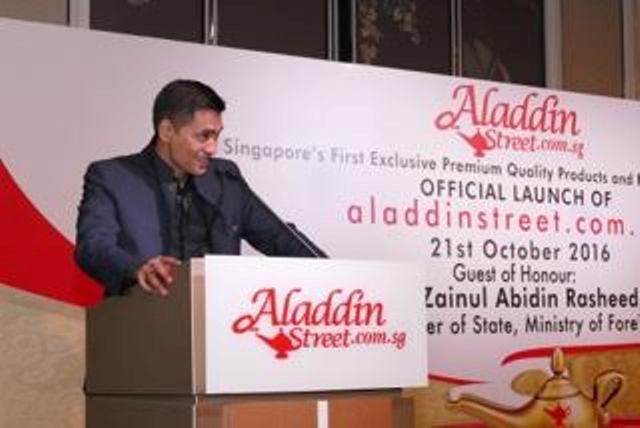 SINGAPORE 21 Oct 2016—The launch of Aladdinstreet.com.sg makes it the world’s first premium quality products and halal e-Marketplace to feature only premium quality and halal products that cater to both the B2B and B2C communities.

In just three months after its July 2016 announcement, Aladdinstreet.com.sg has identified 200 merchants and secured close to 60 merchants, of which close to half are halal-certified. Owned by Muslims and non-Muslims, these halal-friendly and halal- certified businesses range from F & B providers, vitamins, cosmetics, pharmaceuticals, fashion and other services.

“There has been a growing acceptance of the health benefits for halal products even in non-Muslim countries,” says co-founder of the Aladdin Group Dato’ Dr Sheikh Muszaphar Shukor Al Masrie. “But manufacturers and producers of the halal industry can only meet 20 per cent of this demand because there is a lack of reliable marketing platforms. In fact one of the biggest importers of halal products is actually Singapore, and given the country’s good track record in governance and high standards of halal compliance, Aladdinstreet.com.sg will help these SMEs access this market to its fullest potential.”

One of AladdinStreet Singapore’s merchants is Food Empire, a Singapore listed company since 2000, which has been manufacturing halal-certified instant beverages, frozen food and snacks to Muslim majority markets such as Malaysia, Central Asia and the Middle East. All four of its factories in Malaysia are halal certified, and the growing demand for halal has pushed Food Empire to halal certify its factories in Russia and Ukraine to cater to halal consumers in that part of the world. By then 80 per cent of all Food Empire’s products would be halal. Its partnership with AladdinStreet Singapore aims to further expand its halal business into Southeast Asia.

Singapore Co-founder & President, Dato’ Dr Grace Kong adds that Aladdinstreet.com.sg is not just for Muslims because halal is about making healthier choices for everyone including non-Muslims, and everyone has become more socially conscious of their consumption patterns. Dato’ Kong explains, “They want to know what they eat, wear, what they apply on their face, where it comes from and how the animals were treated. It’s about cruelty free, ethical and sustainable consumption too.”

Note Cosmetics was established in 2015 after they noticed a lack of halal cosmetics retailers in the market. Located in Joo Chiat Complex, they have since seen an increase in sales from non-Muslims customers, who have grown to appreciate their products because they do not contain ingredients derived from animals. Tudung Ku Collection was set up in 2012 to address the modern Muslim woman who want easy-to-wear scarves but with a touch of luxury. It has seen a 20 per cent increase in sales over the last four years. Juz Demure started designing and selling dri-fit sports hijab, after they saw more Muslim women wanting to pursue an active lifestyle without compromising on modesty. It has seen an increase in sales of 20 per cent since it started operations in 2015.

These companies have partnered with AladdinStreet Singapore to extend their reach beyond Singapore and hope to increase sales by 40 per cent in the next 12 months. What AladdinStreet Singapore is doing is creating new markets for halal products beyond food. Halal cosmetics, health and pharmaceuticals are growing markets and cosmetic giants from Europe and Korea are already manufacturing halal cosmetics for Muslim markets.

Dato’ Kong adds,“ Aladdinstreet.com.sg will be the gateway for Muslims and non-Muslims and the site will develop a trend for a halal and healthy lifestyle for everyone.”

In terms of its pricing strategy, Aladdinstreet.com.sg is bucking the trend of discounts and flash sales associated with other e-commerce sites because its priority is quality and integrity, and these values are driven by its business integrity checks and stringent halal compliance requirements. In fact, it is rolling out a halal educational programme for merchants to help them better understand these halal compliance requirements.

On the future of Aladdinstreet.com.sg, former senior Minister of State, Ministry of Foreign Affairs, Mr. Zainul Abidin Rasheed, is optimistic that the e-commerce site will create new brand purpose, values and new avenues for growth, especially now that Singapore is experiencing an economic slowdown.

“Singapore is well-known for its branding as a business and financial centre, both in terms of its integrity and quality standards, and this applies to its halal standards too,” says Mr. Zainul.

“Finally a trusted and a convenient one-stop e-commerce site for halal and quality products for me and my family, “ says Singapore football legend Fandi Ahmad.

The Aladdin Group is also on the verge of confirming an exclusive and first-ever brand partnership with one of the world’s biggest football clubs, which will give consumers and merchants access to 650 million fans in over 200 territories, allow for faster access into vast China market and help meet AladdinStreet Singapore’s target of $50m in sales within the first year of its launch.

The Aladdinstreet global network features 30 partners in countries such as China, India, Indonesia, Europe, The Middle East, Japan, Korea, Thailand, Iran and the States. This creates a global footprint of approximately 4 billion consumers

A sum of $130m in marketing dollars has been invested in the Group for the next three years. Aladdinstreet’s objective is to be the world’s largest premium quality products and halal e-marketplace of choice and to be amongst the top ten most profitable e-commerce platforms in the world in the near future. Aladdinstreet caters to the B2B and B2C communities – domestically and internationally – through its user-friendly mobile application and web-base e-marketplace.Follow us on Social Media