The truck driver put on a pair of gloves, got a black object from the cab of her truck and proceeded to smash the mirrors of the man's Honda 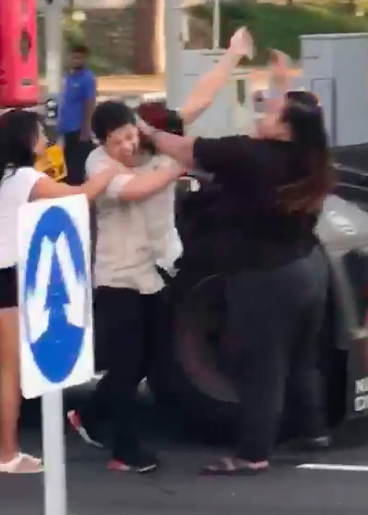 A female truck driver and a man driving a Honda got into an altercation after the male driver allegedly smashed into and broke the truck’s side mirrors.

The incident took place on July 31, at a junction along Changi South Avenue 2.

The videos starts in the middle of the altercation between the woman driving the truck and a man with a car.
There is also another woman wearing white, who appears to be with the man.

The truck’s side mirrors are dangling and look to be damaged.

Things get physical between the man and the female truck driver, who at one point appear to spit at each other.

The man filming the video says in Malay, “Hey, what’s the problem?”

A passer-by who arrives on-scene tries to calm things down between them and says “Accident only, accident only!”, but the truck driver proceeds to put on a pair of gloves and get a black object from the cab of her truck.

The truck driver then smashes the side mirrors of the man’s Honda.

A spokesperson from the police said they were alerted to a call for assistance at Changi South Avenue 3 at about 8.10am.

It is unclear if the drivers were involved in an accident prior to the altercation.

The police also added that the drivers will be charged in court on Thursday.

The woman was driving a truck from Po San Transport Pte Ltd, and when asked for comment, Mr Poh, their boss, declined.

The man, Bryan Goh, released a comment on Facebook detailing the event, adding that the incident started when he tried to filter into the woman’s lane but she refused to give him way. 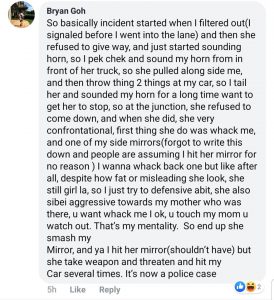