Activist has not paid the S$2,000 fine and has chosen to serve the 10-day prison sentence

The event was held in November 2016 at The Agora in Sin Ming Lane and was entitled Civil Disobedience And Social Movements. One of the speakers — albeit online — was Hong Kong dissident Joshua Wong. The others included activists Kirsten Han and Seelan Pelay.

Wham, who champions migrant worker rights, was convicted under the Public Order Act in 2019. He has not paid the S$2,000 fine and has chosen to go to jail.

This is the second time this year he will spend time in prison. On March 31, he served a one-week sentence for criticising the Judiciary rather than pay a S$5,000 fine.

On Thursday (Aug 20), he tweeted that his appeal on the indoor event had been dismissed. 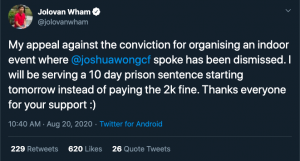 On Friday, he posted photos with some friends who “came to see me off”, adding that he would “make the best of the situation to learn more about prison life while I’m inside”.

Wham also published on his Facebook and Twitter accounts a letter he had written to Mr Desmond Chin, the Commissioner of Prisons, to which he had received no reply.

He had recounted to Mr Chin the time he spent in Changi Prison earlier in the year and had made a request.

“During my time there, I was confined to the cell for the entire duration of my sentence. Ordinarily, yard time would have been provided for inmates, but because of Covid, it was removed to prevent the spread of the virus.

“Being confined for 24 hours in a small cell is quite inhumane. I am wondering it would be possible for the prison authorities to arrange staggered yard time for all inmates, while observing safe distancing. It should be possible to have yard time which is safe for everyone. I had raised this to the prison authorities during the time I was there but they said it was not possible.

“Confining people for two weeks is cruel. Even if yard time was not permitted, even the opportunity to sit outside the cell and look at something else other than the 4 walls of the cell is a welcome relief.

“I expect to be sentenced soon for another offence and will be serving time in prison once again.  I would appreciate it if the prison authorities could look into this matter. Thank you for your time.”