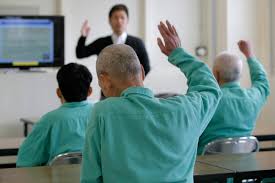 There is a rising trend of Japanese retirees committing crime to intentionally land in prisons to gain access to healthcare and other benefits.

By: Roshni Kapur
Japan is confronted with a new societal trend that spreads across its retirees. The ‘silver haired crooks’ are resorting to life in prison to ease the rising cost of living.
Crime figures, according to a study on the economics of elderly crime by a Tokyo-based research house Custom Products Research, reveal that 35% of shoplifting offences are committed by hard-up pensioners above 60. Within that age bracket, 40% of recidivists have committed the same crime over six times.
The shoplifting crime wave is an attempt by retirees to deliberately end up behind the bars for free benefits. The jails provide all basic amenities such as free board, food, lodgings and healthcare. Japan’s welfare shortfall does not provide some of these benefits to retirees.
The recidivist retiree does not have to do much to find a place behind the prison bars again. Even a petty crime spree such as theft will get him in jail for another two years due to the country’s strict judicial system. The theft of a simple sandwich can help the hungry elderly to achieve his objective.
Old-age poverty
According to an online article on the Financial Times, a prime reason behind the high level of retiree crime is old-age poverty. Japanese retirees with fixed incomes are having difficulty coping with the rising cost of living. On an average, a Japanese senior citizen who has low savings lives off (£4,800) each year.
Akio Doteuchi, a senior researcher on social development at the NLI Research Institute in Tokyo, Japan, predicts that the rate of recidivism will continue to surge.
“The social situation in Japan has forced the elderly into the need to commit crime,” he said.
“The ratio of people who receive public assistance is highest since the end of the war. About 40 per cent of the elderly live alone. It’s a vicious circle. They leave prison, they don’t have money or family so they turn immediately to crime,” Doteuchi was quoted in an online article on The Financial Times.
Another incident where crime was perpetrated by poor social security benefits was when a man in the US made a bank robbery of one dollar in 2013 to get his healthcare insurance covered as a prisoner. James Verone from North Carolina was unemployed and did not have any health coverage. He attempted a bank robbery of one dollar to land him in prison for free medical treatment.
He handed a clerk on duty a note that said: “This is a bank robbery, please only give me one dollar,” according to an online article on NBC news station.
Verone had lost his job that covered his health insurance and had a range of health problems such as slipped discs, arthritic joints, a gammy foot and a growth on his chest which he was unable to pay for. He has achieved his goal ever since he landed in prison: his medical expenses are covered and his health is regularly monitored by medical practitioners.
The incidences of petty crime indicate a welfare shortage rather than a mere contempt for the law. The study by Custom Products Research called to care for Japan’s elderly through greater investment in retiree benefits that will keep the prosecution numbers at bay.
However, the Japanese government is addressing the societal issue not by finding a solution to the retiree crime wave, but by increasing the prison capacity. Till date, the country’s penal system has increased its capacity by 70%.
Retiree crime is rising more quickly than the general demographic ascent into old age that will put 40% of the Japanese population over 65 by the year 2060. With a problem-solution mismatch, the crime numbers will continue to soar. And when crime numbers soar, the prison service will place the country under a bigger financial and budgetary strain.Follow us on Social Media